Organised crime is serious crime planned, coordinated and conducted by people working together on a continuing basis. Their motivation is often, but not always, financial gain.

It can encompass crimes such as modern slavery, people trafficking, child sexual exploitation (CSE), money laundering and a range of other offences, often underpinning the trade in illegal drugs. Criminals often travel from large urban areas elsewhere in the UK to commit these offences, exploiting vulnerable people in Warwickshire as they do so.

Tackling organised crime – and understanding the links it often has with vulnerability – is a key aim of partners across the county through the Serious and Organised Crime Joint Action Group (SOCJAG). Established by the Office of the Warwickshire Police and Crime Commissioner, it brings together the police and a range of agencies from across the public sector to reduce the impact serious and organised crime has on the community, business and the wider economy, while ensuring that the full range of powers are brought to bear on those responsible.

The group also shares information and intelligence on any serious and organised crime activity in the area, including offences such as the trafficking of drugs, people and firearms; modern day slavery; high volume fraud and other financial crime; cyber crime and CSE.

This approach to tackling serious and organised crime has been praised by Her Majesty’s Inspectorate of Constabulary, Fire and Rescue Services (HMICFRS) and is a key element to the Commissioner’s Police and Crime Plan objective of ‘Protecting People from Harm’.

Exploring the links with vulnerability 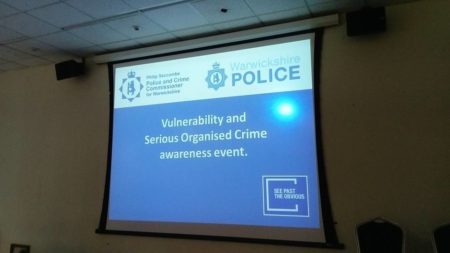 A major conference to raise awareness of the factors which lead to vulnerability and the links which exist to serious and organised crime took place in September 2017.

Organised by the Police and Crime Commissioner Philip Seccombe and Warwickshire Police, the conference at Dunchurch Park Hotel near Rugby saw more than 120 delegates from frontline policing, social services, housing, healthcare, education and local government challenged to ‘look beyond the obvious’ when working in the community.

The day gave practical information for those working at grassroots level on how to identify, refer and deal with concerns in relation to what vulnerability is and how that relates to serious and organised crime groups operating in and impacting on Warwickshire.

Delegates were asked to ‘be curious, ask questions, look, listen, observe, reflect and then act on their professional judgement’ when working in local communities, in order to disrupt and deter serious and organised crime and ensure that the vulnerable people being exploited receive the right protection and support.

The afternoon session also saw the delegates contribute to the development of area-based action plans to tackle serious and organised crime.  Further online training is also being developed by the Office of the Police and Crime Commissioner to assist practitioners in future.