The amount you pay through your Council Tax for policing this year will allow the expansion of police officer numbers to continue. Since the beginning of 2019, Warwickshire Police has grown from 800 to 1,000 officers and over the next year this will be sustained and expanded. Frontline policing also needs good IT and supporting services to make it effective, so I will also make major new investments in these areas.

Significant financial pressures still remain, however, which need careful management moving forwards. I will be ensuring that there is a continued focus by Warwickshire Police on tight financial management so that, as taxpayers, you can see your money is being spent wisely to deliver real improvements to services.

In addition to direct funding of policing, I will be continuing the vital grants and commissioned services which support victims of crime and enable offenders to be rehabilitated, alongside support for community safety initiatives and projects which aim to reduce the numbers of people killed and seriously injured on our county’s roads.

What is happening to the police budget? 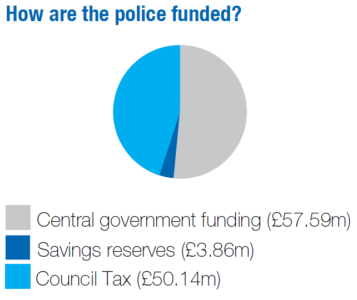 This is being funded through a combination of central government funding (51.6%) and contributions from Council Tax known as the Police Precept (44.9%), with the remainder from savings reserves. During 2020/21 the Commissioner plans to use £3.86m from savings reserves to support the policing budget.

How is the budget calculated?

The financial strategy is to have an affordable and sustainable policing plan supported by a good and balanced budget. This is where day-to-day expenditure is matched by core funding (Government grant and Police Precept).

In setting the 2020/21 budget, the Commissioner has taken into account that, while there has been an increase in the central funding Warwickshire receives from the government, there are still unavoidable pressures policing faces. These include pay and price increases of 2.5%, increased employer pension costs for police staff, along with the higher costs associated with providing general equipment, support and uniform for the extra police officers. This list is not exhaustive and sits alongside the substantial one-off capital and revenue costs associated with the programme to transition Warwickshire Police out of the alliance with West Mercia Police, setting up the arrangements for future service delivery in Warwickshire.

What will I pay?

The amount you pay for the police service will increase across all Council Tax bands by 4.38% in 2020/21. This is equivalent to £9.99 extra per year on a Band D property.

The total amount you will pay per year in each band is as follows:

Please note that Council Tax bands are calculated to four decimal places but are presented here to two decimal places, so the amount may vary by plus/minus 0.01p.

How will the extra funding be used?

The additional funding will be used during 2020/21 for:

Where can I find more detail about police funding?

We have summarised the key figures and headline changes in our Council Tax leaflet, while our full Budget and Medium Term Financial Plan has also been published:

Q: What is Council Tax?

A: Council Tax is a local charge which pays towards the cost of services, including the police.  The Council Tax year runs from 1 April to 31 March and how much you pay depends on which band your house is in.  Each band is calculated as a proportion of band D.

You can check your band at: www.gov.uk/council-tax-bands

Q: What is the Police Precept?

A:  This is the portion of a Council Tax bill that is put towards paying for policing services locally.  On Council Tax notices it may be marked as being for the Police and Crime Commissioner, who sets the budget for the police.  The majority of the precept is used directly for the Warwickshire Police budget, with a small portion used to pay for the Office of the Police and Crime Commissioner.

Q: How much money does the Police Precept contribute to Warwickshire Police each year?

Q: Where does the remainder of the money come from for Warwickshire Police?

A: Central Government provides a number of additional grants each year.  These are the Police and Revenue Settlement Grant, Council Tax Support Grant, Victims Support Grants and grants awarded as a result of previous Council Tax freezes.

Q: How much of the money raised goes towards the Office of the Warwickshire Police and Crime Commissioner?

A: Around 2.4% of the total police budget is allocated to the Office of the Police and Crime Commissioner. The majority of this allocation (approximately £1.7 million) relates to the funding for commissioned support services for victims and programmes to reduce re-offending, alongside the Commissioner’s Grants Scheme, which supports projects in the community which deliver against the priorities of the Police and Crime Plan.

Q. Is the funding providing a pay rise for the Commissioner?