Philip Seccombe’s team  is made up of a small team of full and part time staff who support him in the delivery of the Police and Crime Plan.

To contact the office or any member of the OPCC, please see our Contact Us section.  Details of salaries, diversity and other staffing arrangements can be found on our Team Information page. 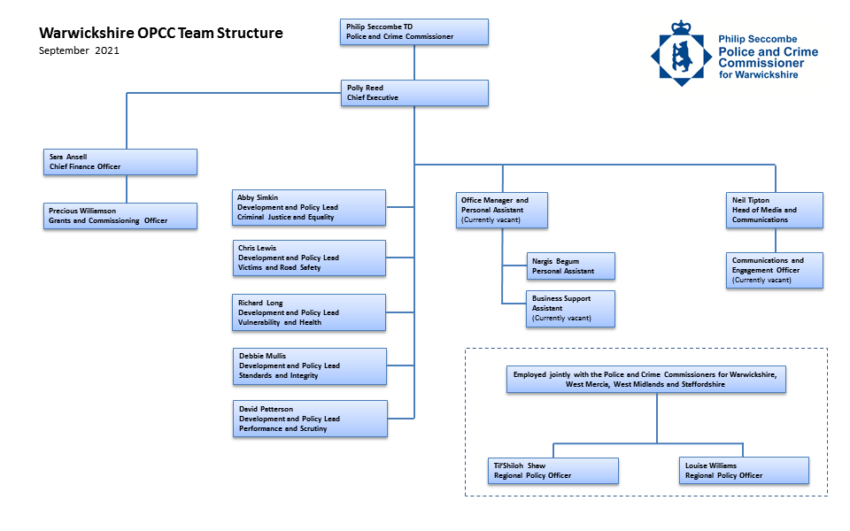 OPCC Structure Chart – September 2021 (Click to open as a PDF)

Polly leads the Office of the Police and Crime Commissioner and its functions.  She provides advice and guidance to the Commissioner and ensures that the OPCC’s work is delivered as effectively and efficiently as possible, and is compliant with all the necessary laws and regulations.  This post is a statutory requirement by law.

Polly joined the OPCC in January 2021, having previously worked for the Office of the Police and Crime Commissioner for the West Midlands as Head of Business Services.  She also served as acting Deputy Chief Executive at the West Midlands OPCC for a three month period.

A graduate in Modern Language Studies from Nottingham University, the vast majority of her working life has been spent in local government in management roles in Children Services and Education, across three different local authorities.

Sara is the Chief Finance Officer for the Office of the Police and Crime Commissioner for Warwickshire.  Sara was appointed to the role in October 2019, having previously served as the OPCC’s Head of Finance.  She manages the budget for the PCC, and advises the Commissioner on all financial matters, working closely with the finance team at Warwickshire Police.

Sara has extensive experience in public sector finance. For 12 months she successfully performed the acting CFO role at Nuneaton and Bedworth Borough Council before joining the OPCC. She is a qualified public sector accountant and a member of CIPFA.

Precious leads on the development of commissioned services as well as overseeing the Commissioner’s Grant Scheme.  She is also the lead for projects tackling rural crime and the Serious and Organised Crime Joint Action Group  and is the lead OPCC liaison with the Rugby Community Safety Partnership.

Each officer leads on an area of work relating to the Police and Crime Plan and provides professional, proactive and effective support to the Commissioner to enable him to fulfil his statutory duties and responsibilities.

Abby is the OPCC lead for criminal justice and equality.  Her policy areas include restorative justice and Integrated Offender Management, as well as overseeing police custody matters, including the Independent Custody Visitors’ scheme. She holds the equality and diversity portfolio and leads on hate crime and attends the force Strategic Diversity Independent Advisory Group.

Abby also attends the Warwickshire Youth Justice Chief Officers Strategic Board, is the drugs and alcohol lead for the OPCC and is responsible for oversight of criminal justice performance via attendance at the Local Criminal Justice Board.

She is also the lead liaison with South Warwickshire Community Safety Partnership.

Chris is a retired Warwickshire Police Chief Inspector.  He leads on work to support victims of crime, including the development of commissioned services (with other colleagues), the implementation of the Victims and Witnesses Charter, unauthorised traveller encampments, the Prevent programme and is also the lead for road safety.

Debbie leads on standards and integrity for the OPCC, including adherence to the Code of Conduct; the Trust, Integrity and Ethics Committee; Professional Standards performance and liaison and leading for the OPCC on police complaints reforms; stop and search and liaison with the Independent Office of Police Conduct..  She also leads on business crime, equality impact assessments and liaison with the Safer Warwickshire Partnership Board.

David is the OPCC lead for monitoring force performance and the development of an assurance programme to ensure adherence with the Police and Crime Plan; liaison with the Police and Crime Panel and Her Majesty’s Inspectorate of Constabulary, Fire and Rescue Services, co-ordination of the weekly ‘holding to account’ meetings between the Commissioner and Chief Constable; and production of the Annual Report.   He also leads on cyber-crime and liaison with the Nuneaton & Bedworth Community Safety Partnership.

A former journalist and police communications specialist, Neil provides strategic communications advice to the Commissioner and OPCC team and manages the relationship with communities through local  engagement, social networks and the local media. He is also responsible for the development of public consultations, maintenance of the OPCC website and management of the Freedom of Information Publication Scheme.

The four Police and Crime Commissioners  across the West Midlands (Warwickshire, West Mercia, Staffordshire and West Midlands) have appointed two policy officers to oversee regional collaboration and give each office oversight of the key national programmes which impact our region.

The administration team provides the Commissioner and Chief Executive with administrative and clerical support, diary management and assistance with correspondence with the public and partners.  They support the wider OPCC to help it run in a smooth and effective manner.

Nargis Begum is Personal Assistant to the Chief Executive and PCC while the Office Manager and Business Support Assistant roles are currently vacant.