Projects to keep Warwickshire safe given a £1 million boost

Projects to keep communities safe, deter re-offending and divert young people away from anti-social behaviour are among the schemes in Warwickshire being given a £1 million boost by the county’s Police and Crime Commissioner, Philip Seccombe.

It is the third year that Mr Seccombe has made funding available to county organisations through his grants scheme and this year sees a number of new projects receiving funding alongside some which are receiving repeat awards. In total £1,035,913 is being awarded in grants or smaller donations.

At a special celebratory event this week in Wolston for those receiving the grants, Mr Seccombe said: “I am delighted to be able to support a range of new projects from local as well as national organisations, with some receiving continued funding and others being awarded grants for the first time this year.

“Many of the projects help to tackle some of the underlying factors which can make people vulnerable to crime or bring them to police attention, such as substance misuse or mental health problems. Others are intended to help victims cope and recover from the effects of crime or to provide support to offenders and their families to enable them to move away from a life of crime.
“Together they will work alongside the other commissioned services I fund and compliment the work of the police and other partners across the county to help deliver a safer, more secure Warwickshire.”

Among those receiving awards are Warwick-based Rethink Mental Health, which is awarded £8,500 to enable it to expand its services across the whole of Warwickshire, to provide help and advice to people with mental health difficulties to ensure they stay safe, as well as give assistance to those seeking employment. 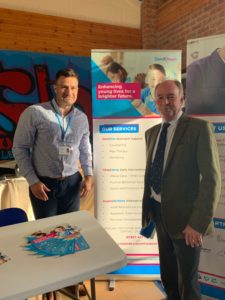 The Dare2Dream Foundation receives £13,000 of funding to deliver its Time2Shine programme across two schools in Warwick District. The scheme aims to support students that are displaying challenging behaviours which could result in permanent exclusion, potentially putting them at risk of becoming involved in crime or anti-social behaviour.

The Family Intervention Counselling Service is also awarded £28,000 to provide a domestic abuse perpetrator programme in Warwick District, to encourage changing behaviours and reduce the risk of abuse to victims. The charity is also receiving a further £12,950 to deliver its Safer Families programme across South Warwickshire. This provides therapeutic support for young people who are being abusive, violent or self-destructive towards themselves or their families.

Across the wider county, funding has also been re-confirmed for project workers delivering the successful Rural Watch, Business Watch and Cyber Safe Warwickshire schemes, in grants totalling more than £360,000. The Safer South Warwickshire Community Safety Partnership also receives its core funding of more than £84,000 from the Commissioner’s Grants Scheme.

A full list of all the supported projects for 2019/20 can be found at: www.warwickshire-pcc.gov.uk/your-pcc/commissioners-grants/

Further funding announcements will be made later this year when the Commissioner allocates £500,000 to schemes which help reduce the number people killed and seriously injured on Warwickshire’s roads.