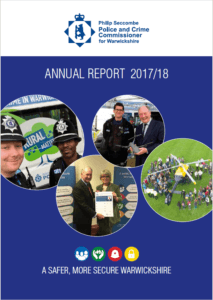 The Police and Crime Commissioner for Warwickshire, Philip Seccombe, has published his annual report, looking back at his past year in office.

The 2017/18 report details how the PCC has met his statutory responsibilities and the progress made over the last 12 months against the four key objectives in his Police and Crime Plan.

It also covers the performance of Warwickshire Police for 2017/18, including the results of the force’s inspections by Her Majesty’s Inspectorate of Constabulary and Fire & Rescue Services (HMICFRS), as well as setting how funding has been allocated to commissioned services for victims of crime and to a wide range of initiatives supporting the Police and Crime Plan objectives through the Commissioner’s Grants Scheme.

It is the second Annual Report published by Mr Seccombe since he took office in May 2016.  Key highlights from the year include the introduction of the Warwickshire Victims and Witnesses Charter, the successful rollout of a county-wide protocol to provide a co-ordinated response to unauthorised traveller encampments, as well as details of the rollout of the major transformation programme for Warwickshire Police, funded by the Commissioner.

Among the key statistics from the year are the more than 6,000 victims of crime who have received quality immediate support through the PCC-funded Victim Support charity, with a further 800 benefiting from more in-depth support. Engagement with the community also remained a priority, with the Commissioner attending 58 public meetings and events across the county and dealing with more than 800 pieces of correspondence.

The year also marked the 160th anniversary of the establishment of a county-wide police force, which was celebrated with a special commemoration event at which the PCC’s Award for Excellence in Policing and Community Safety was launched.

Reflecting on the year, Mr Seccombe said: “This has been another year of significant progress towards meeting the milestones in my Police and Crime Plan.  Developments locally and nationally have brought their challenges through the year but have also offered new opportunities. The increased funding for policing that I lobbied for and secured during the course of the year has meant that we go into 2018/19 on a positive footing, with an additional £2.9 million available to spend directly on protecting and developing frontline policing further.

“Over the next 12 months and beyond I want to sustain the momentum that has been achieved by my office, Warwickshire Police and our partners in delivering a safer, more secure Warwickshire.  It’s hugely important to our residents and local businesses that we continue to improve the service we give to the public, victims of crime and the most vulnerable in society and I will continue working very hard to deliver this.

“I’ll also continue to place engagement as a key priority as it is vitally important that local residents and businesses are part of the decision-making process and can have an influence on how the police and other agencies work in support of their interests.”

The 2017/18 Annual Report can be found on the PCC’s website at www.warwickshire-pcc.gov.uk/ key-information/our- publications/.