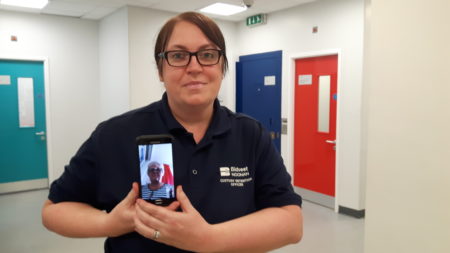 Volunteers who help ensure the welfare of people brought into police custody in Warwickshire have turned to technology to ensure that their vital checks can still take place while continuing to observe appropriate social distancing rules during the Covid-19 outbreak.

In what is thought to be a first in the region, members of the Independent Custody Visiting Scheme have been using video conferencing on mobile phones to ensure ‘virtual’ visits can continue to take place.  The first call took place at the Nuneaton Custody Centre this week, with Independent Custody Visitor Sue Such able to remain at home while being shown around the facilities by a detention officer and also speak with detainees remotely.

During the call, she was shown the cells, kitchen, excise yard and other areas of the custody facility so that continued monitoring of the conditions in which people are being held could take place without physically having to be present.

ICVs are members of the community who come from a variety of backgrounds and sections of the community and whose main duty is to visit police stations unannounced to check on the welfare of people in police custody.

Responsibility for maintaining the ICV scheme in Warwickshire sits with Police and Crime Commissioner Philip Seccombe, who said:  “A huge amount of care and attention goes into ensuring the welfare of detainees when they are brought into police custody and it is vital that the independent monitoring process continues, despite the difficulties brought by the Covid-19 outbreak.

“In fact, it’s never been more important to ensure the welfare of everyone in the custody environment, from the detainees themselves through to the police officers and detention staff that work there and anyone else who has cause to visit. Maintaining a viable and active custody visiting scheme is therefore crucial and I’m grateful for the flexible approach that all involved have shown to make sure that it can continue uninterrupted, while still ensuring social distancing can be observed.”

During the first virtual custody visit, Sue Such spoke to two of the detainees who were willing to be questioned.  There were asked a range of questions, including:

Following the visit, she was able to confirm that there were no issues of concern.

She said: “The virtual custody visit went really well. Using the video calling facility is a great way for us to maintain an oversight, while at the same time safeguarding us as ICV volunteers, the detainees and custody staff during this very demanding time on Warwickshire Police”.

Inspector Lucy Sewell from Warwickshire Police added: “The ICVs and custody staff are all having to quickly adapt to new ways of working during the pandemic, but these virtual visits ensure that the ICVs can still check on the welfare of people in police custody”.

For more details about the Independent Custody Visiting Scheme in Warwickshire, visit: https://www.warwickshire-pcc.gov.uk/working-together/independent-custody-visitor-scheme/