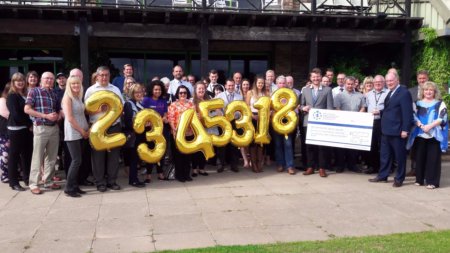 Warwickshire Police and Crime Commissioner Philip Seccombe and representatives of the projects which have received £2,345,318 in funding from the Commissioner’s Grants Scheme.

Awarding his annual Commissioner’s Grants Scheme for 2018-19, Mr Seccombe said that he was delighted to be able to support a wide range of projects which help to ensure that victims are supported, crime can be reduced and perpetrators are discouraged from repeat offending.

The Commissioner’s Grants Scheme is an annual award which seeks to support initiatives which make a positive contribution to the objectives of Mr Seccombe’s Police and Crime Plan for Warwickshire.

When considered alongside the funding committed by the Commissioner for commissioned services, it brings the total of funding provided to county projects and initiatives in 2018/19 to £2,345,318.

Applications for funding from across the county flooded in when the scheme opened for bids in November, with all successful initiatives being evaluated and scored against strict criteria to determine their eligibility and suitability before the final list was confirmed.

Warwickshire Police and Crime Commissioner Philip Seccombe said: “This is the second year I have provided grants to organisations large and small from across the county and I am pleased to be able to slightly increase the available funding this time round.

“All of the grants awarded have been chosen because they are key to help deliver the objectives of my Police and Crime Plan, which aims to make a safer, more secure Warwickshire. Often these are projects which help to tackle some of the underlying issues that can lead to crime, such as alcohol addiction, substance misuse or mental health problems, all of which can provide additional challenges for policing and can have a detrimental impact on individuals and their families.

“Equally, I have been very keen to ensure that the needs of victims have the right level of help and support available to help them cope and recover from the impact of crime and this is reflected in the other awards I am making this year.

“I am pleased that organisations both national and local and from all corners of the county have been successful in their applications, with some receiving continued support alongside others which are new for this year. I look forward to seeing how all of these projects deliver against their aims over the coming year.”

The largest single award is to Victim Support (£461,134) to continue provision of support services for victims of crime in the county, while other large awards include £166,326 to Barnardo’s to fund the team tackling Child Sexual Exploitation in Warwickshire; £150,000 for a programme to address drug and alcohol misuse among offenders; and £125,000 towards the co-commissioned county-wide Refuge domestic abuse support service.

At the other end of the scale, smaller awards include £300 to Warwickshire’s Youth Parliament to help fund an LGBT hate crime campaign; £1,000 for Warwickshire Horse Watch; and funding for Neighbourhood Watch schemes in North Warwickshire, Nuneaton and Rugby.

All funded programmes are required to submit detailed quarterly updates to the Office of the Police and Crime Commissioner to ensure that the expected outcomes are delivered.

A full list of all of the supported projects can be found at: www.warwickshire-pcc.gov.uk/your-pcc/commissioners-grants/.