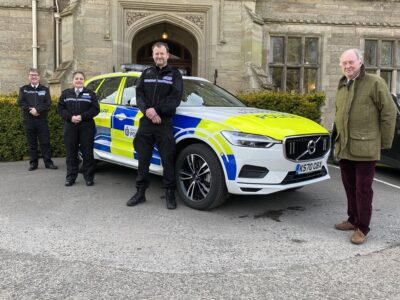 Warwickshire’s Special Constabulary now have their own dedicated roads policing car thanks to a £35k grant from Police and Crime Commissioner Philip Seccombe’s Road Safety Fund.

Special Constables are volunteers who work across a variety of policing teams, and when fully trained can do everything that a regular police officer does, including roads policing.

The new car is a fully liveried police car, equipped with operational equipment including ANPR, breath test kit, tow bar, variable message system, cones, signage, auxiliary lighting and ‘stingers’ that are used strategically to stop vehicles that are considered a danger to other road users. The grant also includes training the Special Constabulary Roads Policing volunteers to use the latest TruCam speed detection devices and other equipment such as weigh scales so they can assist during operations by checking whether a vehicle may be overweight.

Police and Crime Commissioner Philip Seccombe said “It is a great investment from the Road Safety Fund to support the Special Constabulary who do great work alongside regular officers to make Warwickshire’s roads safer for everyone.

“This means that we will have an even greater coverage of our roads for roads policing. This additional police presence and visibility on the county’s road network will help to address driver behaviours through a mix of education and enforcement, as well as removing more dangerous drivers from our roads altogether.

“I’m determined to reduce the numbers of people killed and seriously injured on our roads, so I am delighted to be able to support the Special Constabulary in this way.”

Chief Constable Martin Jelley said “I cannot emphasise enough how important the contribution of our Special Constabulary volunteers is to the force.  The Roads Policing Special Constables are a small team of officers with additional skill sets who with their regular colleagues work towards delivering local and national road safety priorities whilst increasing police presence and visibility on the county’s roads. The new car will allow these highly trained roads policing officers to boost police visibility in the county and we hope make a real difference to our communities.

Warwickshire Special Constabulary Chief Officer Katherine Hancock said “The provision of this vehicle, equipment and training will undoubtedly assist the Roads Policing Special Constables to provide an increased focus on road safety. The team will also work with external partners such as Community Speedwatch to help improve driver behaviour through increased levels of engagement and enforcement.

Warwickshire Police currently has over 100 Special Constables and is actively recruiting for more to join the force.  For more information please follow the link below to the Specials’ careers pages.

Special Constables are voluntary, part-time police officers who work in some of the most important areas of modern policing.

Fully-trained Special Constables have full police powers, wear a police uniform and work alongside regular police officers and police staff, with opportunities for promotion and to develop leadership and management skills.

In return, Special Constables are required to commit a minimum of 16 hours a month, although many people do significantly more as the hours can be flexible to fit around your work and home life commitments.