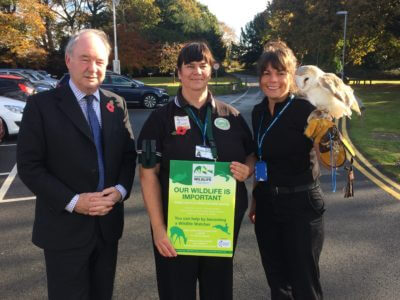 Philip Seccombe, Warwickshire Police and Crime Commissioner with Carol Cotterill, Chair of Warwickshire Rural Watch, and PC Lucy Whatmore from Bedworth Police Station holding one of the owls from the Nuneaton and Warwickshire Wildlife Sanctuary.

A new scheme to raise awareness and improve reporting of incidents of wildlife crime has been launched today (Monday 7 November) across Warwickshire at Warwickshire Police’s Leek Wootton base.

The Warwickshire Wildlife Watcher scheme aims to boost the numbers of reports of wildlife crime incidents, helping police and other agencies to take action against offenders and provide a deterrent to criminals.

Currently wildlife crime is acknowledged as being significantly under-reported, both in Warwickshire and nationally. Police figures show that, since April this year, there have been around 200 wildlife crime incidents in the Warwickshire and West Mercia areas, while work with communities and wildlife groups in the county has shown that incidents are taking place in rural areas including lamping, hare coursing, poaching, animal cruelty and other offences linked to this, such as harassment, anti-social behaviour and threatening behaviour by the perpetrators.

People will have the opportunity to become ‘Wildlife Watchers’ to increase their knowledge and understanding of this type of crime, what to look out for and how to report it. As well as promoting the use of 101 to report incidents to the police (or 999 if a crime is in progress), the scheme also provides a wildlife crime reporting page via the Warwickshire Rural Watch website www.warwickshireruralwatch.co.uk, as well as a dedicated Facebook page.  Signs, posters and flyers have also been produced with key information about wildlife crime.

Wildlife Watchers is initially being launched in North Warwickshire and will later be extended to cover the whole county, as well being adopted within the neighbouring West Mercia Police area.

Carol Cotterill, Chair of Warwickshire Rural Watch said: “Wildlife Watchers is like a Neighbourhood Watch scheme for people interested in wildlife and the countryside.  We know that wildlife crime is under-reported, perhaps because people aren’t sure what it is or don’t know who to report incidents to or how.

“Through this initiative we want people to become Wildlife Watchers and, when they are out and about in the countryside or walking their dogs, if they see anything of concern, they can then report it to the police or make use of the reporting facility on the Warwickshire Rural Watch website.

“We hope to raise the profile of wildlife crime and give people the understanding that if people report it, there are a range of agencies who do look into such reports and can take action against offenders. The Wildlife Watchers scheme brings all of these agencies together and also allows us to pass on hints and tips to the public on what to look out for.”

Warwickshire Police and Crime Commissioner Philip Seccombe said: “Wildlife crime is an issue that has been raised with me as I’ve been around the county in the last six months and it is an issue that is under-reported, possibly because of a perception that nothing can be done.  This scheme will help to raise awareness of what wildlife crime is, provide an easy way to report it and, ultimately, give the public the confidence that something will be done about it when it is reported.  Over time I hope that this will deter offenders and result in a reduction of wildlife crime in the county.”

To find out more about the scheme, visit www.warwickshireruralwatch.co.uk and follow the link to the Wildlife Watchers pages. 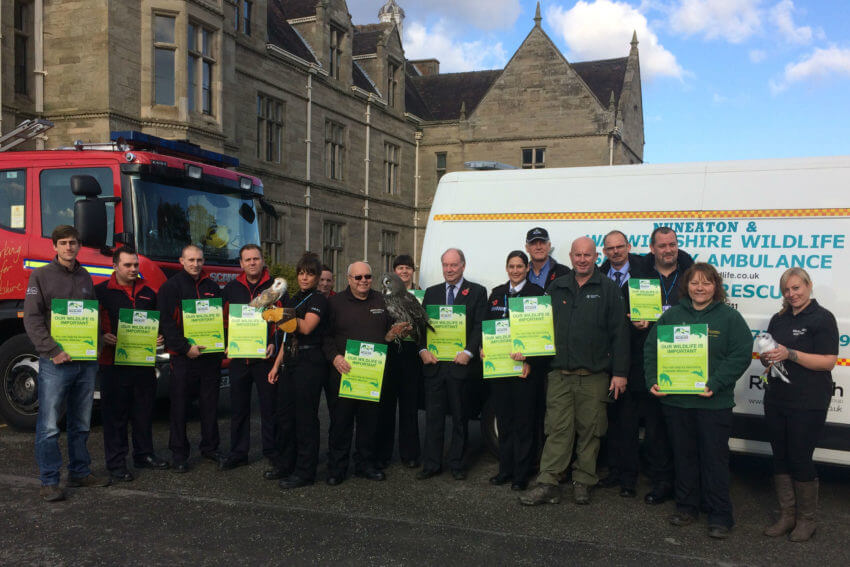 All of the partners at the Leek Wootton launch, together with animals from the Nuneaton and Warwickshire Wildlife Sanctuary.