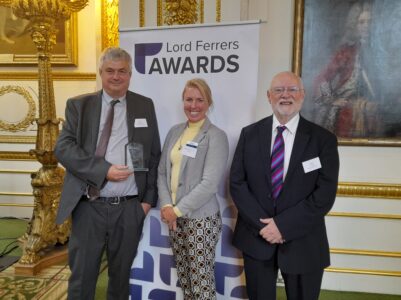 A scheme established by the Warwickshire Police and Crime Commissioner to help support vulnerable adults when they are detained by the police has won a prestigious national award in its first 12 months.

The Office of the Police and Crime Commissioner (OPCC) Volunteer Appropriate Adult Scheme scooped top spot in its category at the Lord Ferrers Awards in London, organised by the Home Office. The annual awards recognise a wide range of policing volunteers across 11 individual and team categories.

The Warwickshire volunteers were among a total of 52 from across the England and Wales commended for effective and creative contributions to policing. Their efforts were judged as having had a positive impact in their communities and inspired others in the field.

The Warwickshire OPCC Appropriate Adults scheme was established in November 2021 with six volunteers. They provide advocacy and support for vulnerable adults who have contact with the police, safeguarding their interests, rights, entitlements and welfare, helping ensure they both understand and can properly contribute to the justice processes. This can include when they are detained in police custody or during a police interview.

In their first six months, the Appropriate Adults completed an amazing 200 hours of voluntary service through more than 70 call-outs, helping to support at least 65 vulnerable adults during that time.

Their efforts were commended by the Lord Ferrers Awards judges, who selected the Warwickshire scheme as the winner of the OPCC Volunteer Award.

Warwickshire Police and Crime Commissioner Philip Seccombe said: “To have won a prestigious Lord Ferrers Award within the first year of operation is an extremely impressive achievement and shows the phenomenal efforts our volunteers have made to ensuring the success of the scheme.

“The quality of support they have offered to some of the most vulnerable and often frightened detainees has been extremely valuable, not only to the individuals concerned but also in terms of the feedback they are able to give my office and the force about the standards and processes within the custody environment.

“The Appropriate Adults respond to callouts at almost any time of day and have never been late when requested to attend.  Sometimes they remain in custody with a detainee for most of the day or into the early hours the night, or on other occasions return the next day in complex cases.

“The dedication and care they have shown to the scheme and the support they have provided to vulnerable people is hugely impressive and I am pleased to see it rightly achieve this national recognition.”

Policing Minister Jeremy Quin and Permanent Secretary Mathew Rycroft presented trophies at the event held at Lancaster House, which was attended by a number of the Warwickshire volunteers and Deputy Police and Crime Commissioner Emma Daniell.