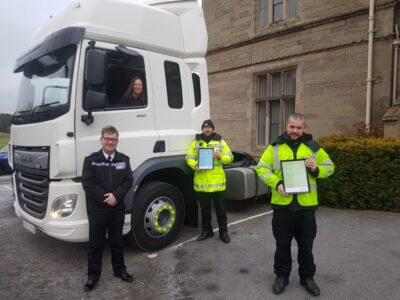 Warwickshire Police’s Commercial Vehicle Unit has won a national award from Highways England for the second year running in recognition of the dedication of officers in achieving ‘Top Performing Force 2020’ in the country for Operation Tramline.

During Operation Tramline, officers use a specially-adapted HGV ‘supercab’ owned by Highways England to observe driver behaviours in all vehicles and deal with any offences on Warwickshire’s road network. These are drivers that could have caused death or serious injury to themselves or other users of Warwickshire’s Roads.

The award was made on Friday 12 February 2021 in the presence of Chief Constable Martin Jelley, PS Stafford and PC Russell by Highways England Assistant Regional Safety Co-ordinator Marie Biddulph who said “Winning this award for the second year running is testament to the commitment of Warwickshire Police in helping us to tackle dangerous driving on our roads.

“The support of our police partners across the country is vital for the success of Operation Tramline and our efforts to reach that minority of drivers who are putting themselves and others at risk by simply ignoring the law.

“Together, through initiatives such as Operation Tramline, we are helping to make our roads safer.”

Chief Constable Martin Jelley said “I’m extremely proud of what the Commercial Vehicle Unit has achieved to date to make our roads safer for everyone.  They are a small team who work extremely hard to do whatever they can to reduce the number of people killed or seriously injured on our roads.  Tackling unsafe driver behaviour remains a high priority for the force, behind every death or serious collision on our roads are devastated families. We need everyone to drive safely and with consideration to others on our roads.”

Police and Crime Commissioner Philip Seccombe said “The Commercial Vehicle Unit has been a great success since it was set up with the help of my Road Safety Fund. To scoop this accolade two years in a row just highlights the hard work of all of the officers involved and the success that partnership working with Highways England brings.  I’ve been determined to see reductions in road casualties across Warwickshire and the work that the CVU has been doing through Operation Tramline plays a major part in that.”

Speaking for the team, PS Carl Stafford said “Operation Tramline is about keeping people safe on our roads.  We are delighted to be recognised by Highways England for our work in identifying those people who pose serious danger to themselves and other road users. It would not be possible without the dedication of a small number of passionate officers, our special constabulary and support from our partner agencies.”

“The ‘supercab’ is invaluable because it allows officers to see all road users from an elevated position, giving a much clearer view of what drivers are doing. For example, if a driver is using a mobile phone or not wearing their seatbelt. The ‘supercab’ allows our officers to film evidence of unsafe driving behaviour by pulling up alongside vehicles often on our motorway network where drivers really need to concentrate on their driving. If offences are identified then officers following behind the cab are notified and the driver and vehicle intercepted and dealt with.

Led by officers from the Serious Collision Investigation Unit, the Commercial Vehicle Unit is financed by Warwickshire Police and Crime Commissioner Philip Seccombe’s Road Safety Fund as part of his ambition to reduce the numbers killed and seriously injured on Warwickshire’s Roads.  The CVU often works in partnership with the Health and Safety Executive, Highways England, Environment Agency, Road Haulage Association, DVSA and HM Revenue & Customs and is also regularly assisted by the Special Constabulary.

Since its formation in January 2019, the work of the CVU has been recognised not only by Highways England but last July they were nominated by their peers as ‘HGV Heroes’ on the Road Haulage Association website www.hgvheroes.co.uk, acknowledging their work throughout the pandemic ensuring that HGV drivers are taking the appropriate breaks, securing their loads and adhering to CDG regulations. In November they were announced the winner of the ‘Public Service Operator of the Year’ category in the UK Logistics Awards 2020 after being shortlisted in September 2020.

You can follow the work of Warwickshire’s Commercial Vehicle Unit on Twitter to see their latest vehicle stops and checks using the hashtag #CVUWarks.  Or follow the CVU on @OPUWarks.