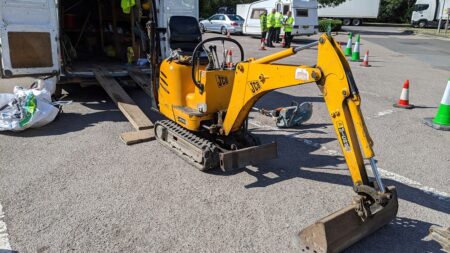 Operation Homberg took place on 6 June on the M6 at Corley North and 3 August on the M40 South with officers from the Commercial Vehicle Unit and OPU working closely with Warwickshire Police Rural Crime Team, Highways England, NAVCIS and the Caravan and Camping Club.

During the two day operation three stolen trailers were identified and a stolen Land Rover. Officers also seized a mini digger identified as stolen from Nottingham in 2014.

PS Shaun Bridle said “Operation Homberg was the first of our multi agency operations on the motorway network following COVID restrictions being lifted and officers and partners achieved some significant results.”

Twelve vehicles were found to be overweight and the drivers received Traffic Offence Reports.  The vehicles were prevented from continuing their journey until their weight was brought back down to a legal level.

Seven vehicles were identified with defective illegal tyres and Traffic Offence Reports were issued to the drivers.

Officers also identified eight insecure loads and the vehicles were prohibited from continuing their journey until made safe. The drivers received Traffic Offence Reports 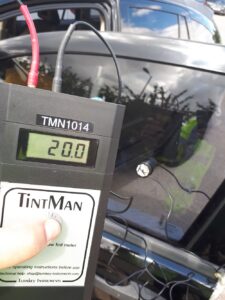 Officers checked the tint levels of several vehicle windows and found them to be in contravention of regulations.

Two vehicles were found to have excessive tinted windows and dealt with by means of Traffic Offence Report and drivers required to remove their tints before allowed to continue on their journey.

It wasn’t just the vehicles officers were checking, two drivers were found not to have appropriate Insurance, their vehicles were seized and drivers reported.

Three drivers were found driving with no driving licence – one of these was towing a caravan.  All were reported and their vehicles seized.

During the operation, officers also carried out seven HGV driver hours checks and a number of HGV offences were identified with one HGV running with no tachograph to record the driver’s hours.  Another HGV was found to be running without an Operators Licence, one HGV had no rear markers and another no rear plate.

Sergeant Shaun Bridle of the Commercial Vehicle Unit added “During the operation advice was given to many drivers as we would rather educate drivers to help change behaviour and use enforcement as a last resort.

“There is a risk to the public every day due to drivers not complying with road safety laws. For example if you do not secure your load properly, it can shift causing injury to drivers, or fall into the road causing injury to other road users and pedestrians. Our aim is to reduce the number of people who are killed or seriously injured on Warwickshire’s roads and we will continue to target vehicles for these offences”.

You can follow the work of Warwickshire Police OPU and the Commercial Vehicle Unit on twitter to see their latest vehicle stops and checks @OPUWarks.  The CVU uses the hashtag #CVUWarks.