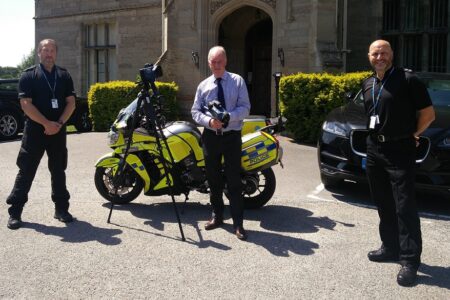 The new LTI TruCAM II traffic and speed recording equipment will be put to immediate use by both Safer Neighbourhood Team and Operations Patrol Unit officers to help deter and detect speeding offences across the county.

In particular, the equipment will help officers identify high-speed offenders on two wheels as well as those on four, thanks to its ability to detect any type of vehicle, with video footage captured of the offenders as well as high-resolution imagery which can reveal the make, model and registration plates.

This in turn will free up officers’ time as they are able to record the evidence required at the point of capture, reducing the need for officers to attend court in those cases where an offence is contested.

Warwickshire Police and Crime Commissioner Philip Seccombe said: “I am delighted to support Warwickshire Police by funding the purchase of the latest technology in speed cameras from my Road Safety Fund.  Speeding makes it more difficult for a driver to maintain control of their vehicle and the police have my full support to enforce speed limits and take action against those who break the law as this will make Warwickshire’s roads safer for everyone.

“We know that bikers in particular can be more vulnerable in a collision, so it is important to be able to educate and where necessary enforce those who speed in order to ensure the safety of all road users.  Speed is just one factor, however, so I support a range of other initiatives aimed at bikers to help them improve their safety.  These include BikeSafe, the police-led motorcycle safety initiative, and Biker Down, which offers free training courses for bikers in Warwickshire.”

Inspector Jem Mountford added: “The new equipment is very portable and this means officers can easily set up anti speeding operations on hot spot routes identified by the force, with the added benefit that officers can be more mobile and responsive to changing demands.

“It is not ok to speed. Speeding is one of the ‘fatal four’ major causes of death and serious injury on the roads and whilst we will always choose to educate first, the new speed cameras are a welcome addition.  Officers will be using the equipment across Warwickshire specifically to deter speeding motorists and motorcyclists as one of a range of measures to help save lives.”

In Warwickshire, between 1 January 2017 and 31 December 2019, 92 people were killed and 669 seriously injured in collisions where speed or loss of control was recorded as a contributory factor. Police and partners are working hard to reduce these numbers.

Warwickshire Police announced in June that more than 3,000 motorists had been caught speeding as lockdown restrictions eased, highlighting the need to continue to target motorists who break the law.