Warwickshire police officer is bravest of the brave 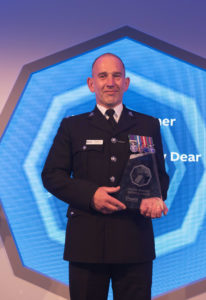 A Warwickshire Police officer has been named the overall winner at this year’s national Police Bravery Awards, for his actions in saving a man’s life in an overturned car.

PC Andrew Dear was first on the scene of a serious car accident near Atherstone and went to help the most injured person, who was trapped between the roof of the upturned car and the road. The car was ripped in half, with the top half of the man’s body ejected though the sunroof and he was trapped with a severe head injury. The wreckage of the car was leaking fuel and there was a real risk of a major fire or explosion.

The officer scrambled into a 10-inch gap under the roof of the car, so that an airway could be maintained and to take some of the weight of the car on his back. The casualty was drifting in and out of consciousness and bleeding badly, so PC Dear constantly talked to and reassured him. There was a real risk of the fuel catching fire, but PC Dear stayed with the casualty, which allowed a paramedic to secure an IV line and stem the bleeding. PC Dear placed himself in a dangerous and life-threatening situation, refusing to leave the man and helping to save his life. 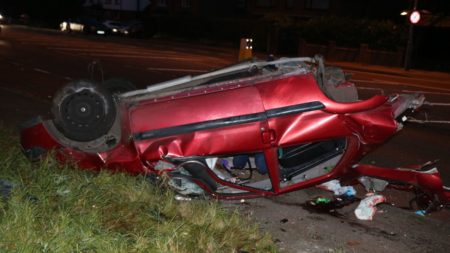 The scene of the crash which PC Dear attended.

Speaking of the incident afterwards, the casualty, and why the officer did what he did, PC Dear said: “Knowing what his family would probably be thinking had he not made it, knowing somebody was there with him when he was injured, trapped – that means everything.”

His actions were recognised at the 24th national Police Bravery Awards in London last night (July 18), which honour and recognise police officers who perform outstanding acts of bravery.  PC Dear was earlier named the winner of the Region 3 – Midlands Police Bravery Award, as one of 71 officers from 40 forces across England and Wales who were nominated for the 2019 awards.  All of the nominees also met with Prime Minister Theresa May at Downing Street prior to the ceremony.

Presenting the award at the ceremony, Home Secretary Sajid Javid said: “PC Dear’s bravery is truly extraordinary and deserves to be recognised with this award.

“I pay tribute to the courage and professionalism of this country’s dedicated police officers, who put their lives on the line to keep us all safe day after day.

“All of today’s nominees and winners exemplify this selflessness and are living proof that we have the best police in the world.”

Warwickshire Police and Crime Commissioner Philip Seccombe, who attended the awards ceremony, said:  “PC Dear’s actions have been recognised as being the bravest of the brave, stepping forward heroically to protect a member of the public without a second thought to his own safety.

“It’s typical of the modesty I see in many of the police officers as they deal with the challenging and dangerous situations that they come across that PC Dear does not think he did anything particularly special that night. This award demonstrates that that is not the case and his actions have been recognised at the highest level nationally as something very special indeed.

“I know that everyone across Warwickshire will be delighted that this is the case and grateful to have officers of the calibre of PC Dear working in our communities to keep us all safe.”