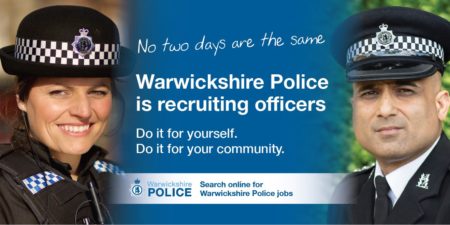 Warwickshire Police is among the first forces in the country to extend their eligibility criteria for new officers to members of the armed forces and emergency services, as well as people who have had significant contact with the public in their working lives.

The force is currently recruiting for new officers, as well as transferees from other forces. Warwickshire Police has recently launched a recruitment campaign which aims to deliver on Police and Crime Commissioner Philip Seccombe’s promise to spend the whole of this year’s police precept increase on frontline posts.

Previously, applications for Warwickshire Police officers were only open to people with a level 3 qualification (two A levels grade A-C or equivalent), or those with a previous or current police role, such as Police Community Support Officer or Special Constable.

However, the force will now also consider military service personnel who have served a minimum of five years in the armed forces, or are six – nine months away from their last day of service, with an exemplary disciplinary record. Workers from relevant emergency services or public-facing organisations, such as paramedics and communications staff in the emergency services, are also eligible to apply. People with roles including other public contact will also be considered on a case by case basis.

Other eligibility criteria, such as not having adult or juvenile cautions and convictions and certain tattoos, and being physically fit with a healthy Body Mass Index (BMI), will still apply.

Assistant Chief Constable Alex Franklin-Smith said: “In addition to increasing our pool of quality candidates with public-facing customer experience, this widening of our eligibility criteria will also support the employment of military veterans.

“Warwickshire Police fully recognises and values the enormous contribution the armed services make, and have made, to the overall safety and security of the UK over many decades.

“We currently hold the Silver award from the Defence Recognised Employer Scheme as one of the UK organisations which pledge, demonstrate and advocate support to the defence and the armed forces community. This recognises that Warwickshire Police has a comprehensive structure in place to support support service veterans.”

Warwickshire Police and Crime Commissioner Philip Seccombe said: “I want to ensure that Warwickshire Police can recruit from the widest pool of candidates possible to attract the very best recruits in support of my pledge to increase police officer numbers, so this extension of the eligibility criteria is good news.

“This change will give a great new opportunity to those leaving the armed services. I know from my own military service that many of the skills that veterans have are complementary to policing and the additional life experiences they bring can be very valuable, giving a different perspective and helping the organisation grow.

“It also makes sense that those working in other emergency services and public-facing roles have the opportunity to apply, as they too can often have the right mix of experience and skills to become a police officer. I would encourage anyone interested in becoming a police officer to go online and find out more.”