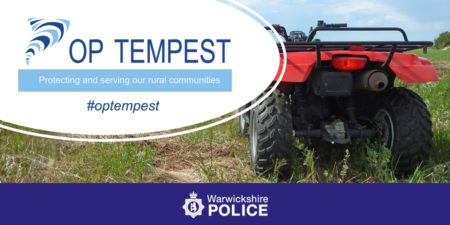 This week sees Warwickshire Police launch Operation Tempest, a new initiative aimed at tackling acquisitive crime, with a focus on rural communities within the district of Stratford-upon-Avon.

Acquisitive crime includes a range of burglary and theft based offences, and incorporates issues such as theft from vehicles, commercial burglaries, theft of livestock, theft of quad bikes and theft of caravans.

Over the coming weeks, the public can expect to see a heightened police presence, as officers focus on a range of activities including increased patrols and attending a number of events across the Stratford District to raise awareness of acquisitive crime.

Chief Inspector David Kettle who is leading the operation, said: “Following a recent spate of commercial burglaries in rural areas of the Stratford District, we not only recognise the need for Operation Tempest but recognise the impact these crimes have had on the individuals and communities that have been affected.

“We want to reassure those rural communities that often feel isolated, that we are working hard to identify those responsible, while empowering and engaging our communities who we believe, will play an integral part in the solution in tackling acquisitive crime.

“Through Operation Tempest, we also want to send a clear message to thieves that we will be employing a range of tactics aimed at preventing acquisitive crime and catching those responsible, and we will do everything in our power to bring them to justice.

“The events we will be attending over the course of the campaign offer a great opportunity for our local officers to get out into the community and speak to people, telling them about the work we’re doing while offering some expert crime prevention advice.

“It is well known that simple crime prevention measures can act as a great deterrent to criminals, and by taking some simple steps members of the public can help prevent themselves from being targeted.”

Warwickshire Police and Crime Commissioner, Philip Seccombe said: “I am continuing to ensure that the police have the right funding and equipment to tackle crime wherever it occurs, with extra officers helping to boost the response to the public.

“We do know however that rural towns and villages can feel particularly isolated and vulnerable, while the effects of criminal activity in these communities is keenly felt by residents and businesses alike.

“That’s why it’s vital that our police continue to evolve their tactics to tackle the changing nature of crime, targeting offenders and boosting patrols in the areas where crime is occurring.

“Operation Tempest is a good demonstration of this and I want it to really reinforce the message that rural parts of our county should not be viewed as a soft touch for criminals.”

Over the course of the initiative, Warwickshire Police will be highlighting a range of activity and operations taking place across the Stratford District. You can keep an eye on the progress of the campaign on the force Facebook (www.facebook.com/warwickshirepolice/), Twitter (@warkspolice) and Instagram (SouthWarwickshireSNTs) social media channels. The hashtag #OpTempest will be used on Twitter.

To report an incident of acquisitive crime or any suspicious activity you may have seen, please call Warwickshire Police on 101. Always call 999 in an emergency.

Alternatively, you can provide information anonymously to independent charity Crimestoppers on 0800 555 111 or via their website, www.crimestoppers-uk.org.