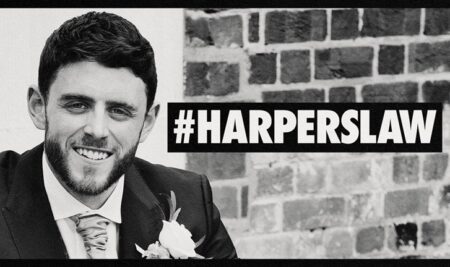 Warwickshire Police and Crime Commissioner Philip Seccombe has given his backing to the Harper’s Law campaign, which seeks mandatory life sentences for people who kill emergency services workers.

Murder already carries an automatic life sentence and, where the victim is a police officer doing his or her duty, the statutory ‘starting point’ is already life without parole.

Harper’s Law will mean that those guilty of the lesser offence of manslaughter will also receive a life sentence, where the victim is a police officer, paramedic, firefighter or any other emergency services worker.

Lissie Harper began the campaign to introduce the law following the death of her husband, PC Andrew Harper, who was dragged to his death by a getaway car along country lanes in Berkshire in August 2019. He had become entangled in a strap attached to the vehicle as he tried to deal with three quad bike thieves. When his killers were spared life sentences at their subsequent trial, PC Harper’s widow launched her campaign for tougher punishments.

The Police Federation has also voiced its support for Harper’s Law and a Change.org petition started by Lissie Harper has received the signatures of more than 730,000 people, among them the Warwickshire PCC.

Mr Seccombe said: “Every day police officers put themselves in harm’s way in order to protect the public, deal with criminals and keep vulnerable people safe. As with PC Harper, sometimes they make the ultimate sacrifice and lose their lives through the criminal actions of others. While thankfully this is extremely rare, it is a possibility that every officer has to carry with them when on duty and something that I know is an ever-present source of worry for their families.

“It can therefore only be right that the criminal justice system applies its full force against those who are found to be criminally responsible for the death of police and other emergency services workers. Stronger sentences than are available now are not only the very least that the families of these personnel deserve, they are also what I think the public overwhelmingly expects. There can also be no better deterrent than knowing that causing a death in this way will result in a life sentence.

“I fully support Lissie Harper in her bid to get the law changed and will do whatever I can as Police and Crime Commissioner to help achieve this, including raising it with our local Members of Parliament and Government Ministers. I have also shared my position with the Warwickshire Police Federation, as it is important that locally we do all we can to assist this change in the law.

“I know the Home Secretary and the Policing Minister have met with Lissie Harper and they have expressed their determination to bring about change, so I am hopeful that with cross-party support this can be effected soon.”

Warwickshire Police Federation Chair Simon Payne said: “I would like to place on record my thanks to Philip Seccombe for fully supporting Harper’s Law. An unequivocal position on this important issue is vital for policing in the future.”