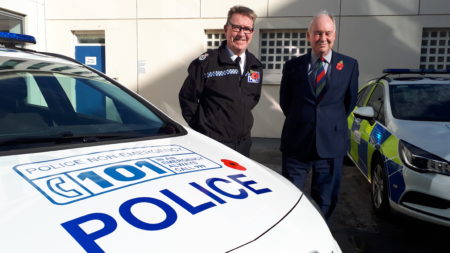 Chief Constable Martin Jelley and Police and Crime Commissioner Philip Seccombe back in November, showing off Poppy Appeal markings on a police car.

Warwickshire Police’s Chief Constable Martin Jelley will remain at the helm of the force until March 2022, after his contract was extended by the county’s Police and Crime Commissioner, Philip Seccombe.

Chief Constable Jelley was first appointed to the role in April 2015, joining Warwickshire Police from neighbouring Northamptonshire Police. Since then, he has led the force through some of the most significant changes in its history, following the enforced termination of the strategic alliance with West Mercia Police.

His contract was due to end in March but has now been extended for a further two years.

Mr Seccombe said: “Martin is an excellent Chief Constable and has demonstrated unparalleled leadership for the force through what has been a significant period of change. He has done so with the respect of those he commands as well as the many partner organisations we have in the county.  It is therefore fantastic news for Warwickshire to be in a position to retain his leadership, professionalism and skills for the next couple of years.

“I was delighted to be able to offer him an extended contract and even more delighted to have his acceptance.  It bodes well for the future of Warwickshire Police as it transitions to a new and exciting chapter in its long history.”

Chief Constable Jelley added: “I am extremely proud of Warwickshire Police and our outstanding and dedicated workforce.  We are on a significant journey as part of our Evolve change programme, re-establishing services within Warwickshire and building new collaborative partnerships.  There is still much to do as part of this and I feel the stability of consistent leadership will be in the best interests of the force at this time.

“I am therefore delighted and extremely proud to have the opportunity to continue in my role as Chief Constable.”