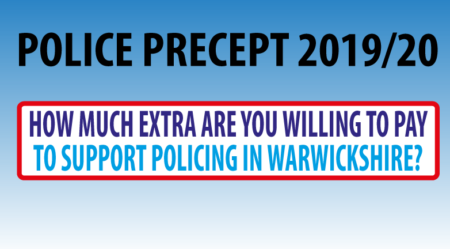 Warwickshire Police and Crime Commissioner Philip Seccombe is asking the public to have their say on plans to increase the number of police officers, community support officers and police staff investigators by up to 100, in order to meet rising demand and provide a better service to local communities.

The proposals come as part of the draft budget for the 2019/20 financial year and would allow for officer numbers to be boosted and deliver improved capacity for urban and rural policing. This will build on last year’s police precept investment of 50 frontline police officer posts.

The consultation follows the Government’s annual funding settlement announcement for policing on 13th December, which has given PCCs flexibility to raise their precept by up to £24 on a Band D property for 2019/20.

The Commissioner wants to hear your views on these plans, which would require an increase to the police’s share of council tax in 2019/20. An online survey is now live and will be shared widely in the coming days to allow for the highest possible feedback.

Under the proposals, achieving the maximum number of new officers would require an increase of £2 per month for an average Band D council tax payer, but could deliver 85 new police officer posts, five new police community support officers and an additional 10 police staff investigators.

As well as these additional officers, the extra funding would also ensure that much-needed investments could continue to be made into modernising police IT and estates to ensure they are efficient and effective, enabling Warwickshire Police to deliver an improved service to the public.

Options for increases of £1.50 per month and £1 per month at Band D are also being consulted upon, but these would see fewer new officers posts created and no new PCSOs or police investigators appointed.

Warwickshire Police and Crime Commissioner Philip Seccombe said: “When I go around the county talking to the public, people make it very clear to me that they want to see additional police officers out on patrol and working to protect our communities from crime and for crimes to be investigated quickly and effectively when they are reported.

“Similarly, when I talk to police officers in Warwickshire, I hear of the increased workloads that they are all having to carry in order to meet the current rising levels of demand.

“The Government has provided some welcome additional funding for policing this year, but this alone will not deliver enough resources to be able to make the substantial increase in officer numbers that I believe is required, nor would it fully allow for the investments in IT, equipment and estates that are badly needed in order to improve the quality of service given the public.

“Doing nothing to change this situation is not an option that in my view is either sustainable or desirable, so this year I have outlined proposals to increase the portion of Council Tax by up to £2 a month, £1.50 and month or £1 a month on average, in order to provide the Chief Constable with the resources he needs.

“While these increases are based on an average Band D taxpayer, in reality, many people would see a smaller increase, with those Warwickshire residents living in Council Tax bands A to C paying proportionately less per month. However, I understand that any proposals to raise Council Tax cause concern, so I am very keen to get the public’s views on which of these options is the most preferable.

“Your opinions will help influence my final decision on next year’s budget and I hope to hear from the widest possible number of you through the consultation survey.”
You can give your feedback online at www.warwickshire-pcc.gov.uk. The survey will be open until Thursday, January 24, 2019.

The Commissioner is also holding a special event for businesses to give their feedback on the proposals. It will be held at 2pm on Thursday 10 January at the Northgate House Conference Centre in Warwick. Anyone interested in attending should contact the Office of the Police and Crime Commissioner on 01926 733523 or email opcc@warwickshire.police.uk.

For further information about Council Tax and to check the tax band of your home, click here to visit the Gov.uk website.

Please note the survey has now closed.  Thank you to all who took part. 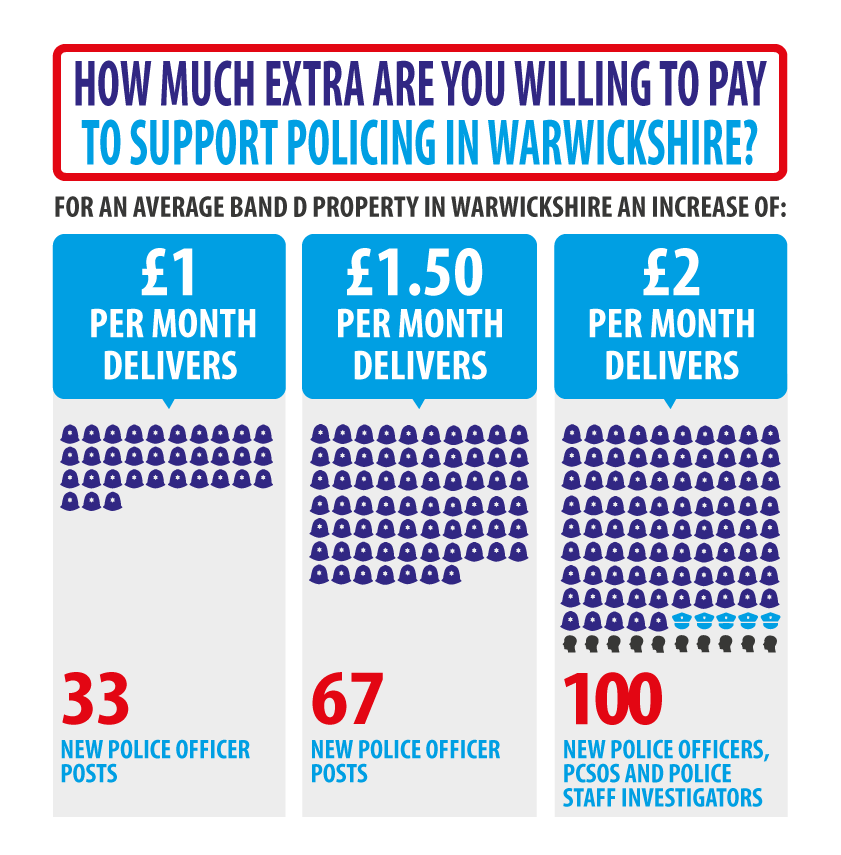