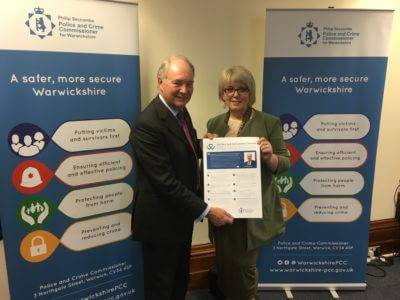 Warwickshire’s Police and Crime Commissioner Philip Seccombe has launched a new charter which sets out the standards and services communities should expect to receive from the police and criminal justice agencies in the county if they fall victim to or witness a crime.

The Warwickshire Victims and Witnesses Charter outlines nine key expectations that the public should have when dealing with the police and other agencies, such as being kept up to date on their case, being able to make a statement to explain the impact a crime has had on them and receiving appropriate and tailored support before, during and after any court case.

Warwickshire Police and Crime Commissioner Philip Seccombe said: “This charter aims to help ensure that the right measures are in place to support people in Warwickshire to cope after crime, and get their lives back to normal as soon as possible. It has been designed to ensure that the police and criminal justice agencies are doing all they can to ensure that witnesses are in the best position to give their evidence to court in order to maximise the chance of convicting offenders.

“Often people are unaware of their rights they have or the responsibilities that the agencies they are dealing with must uphold, so by setting these out in a clear and straightforward way, the charter will provide a means for the public to hold myself, the police and the other justice partners to account to make sure these standards are being delivered.

“Putting this charter in place was a key pledge I made during the election and my office has been working closely since then with Warwickshire Police and the other agencies involved in delivering justice to make it a reality.” 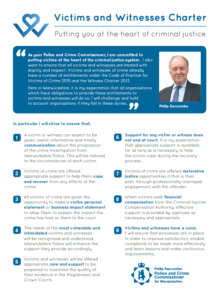 While there is already a strong focus on putting victims and witnesses at the heart of criminal justice in Warwickshire, Mr Seccombe said that the charter provided another mechanism to drive forward improvement.

“By working together we can provide a better service for victims and witnesses,” he said.  “I will be monitoring closely how agencies perform in relation to the charter pledges as I am determined that it should help us all to make another genuine step forward.”

The charter was officially launched at Warwickshire Police’s Leek Wootton policing base as part of a visit to the county by Baroness Newlove, the Victims’ Commissioner for England and Wales. While in Warwickshire, she toured the Justice Centre in Leamington, meeting key partners involved with supporting victims and witnesses and also spoke with a number of county victims of crime to understand their experiences of the criminal justice service.

To read a copy of the charter, click here.