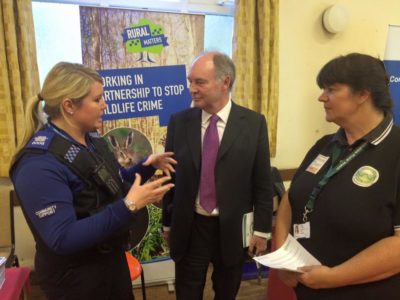 Warwickshire Police and Crime Commissioner Philip Seccombe says he will ensure that crime in rural parts of the county is taken as seriously as crime in urban areas.  This remains one of his top priorities.

With new data published this week by NFU Mutual showing that rural crime cost those it insured in Warwickshire around £750,000 last year, Mr Seccombe says that he will continue to support schemes and police initiatives across the county to tackle the issue.

Underlining his commitment to tackling rural crime, the Commissioner’s first public engagement on taking office in May was to attend a Rural Crime Forum in Over Whitacre, organised by Rural Crime Co-ordinator Carol Cotterill. This featured local police officers, council officials and a wide range of partners, including the NFU, who heard the public’s views of crime in rural communities and provided feedback and advice on the steps being taken to address their concerns.

Warwickshire Police and Crime Commissioner Philip Seccombe said: “I was hugely impressed by the turnout at the meeting, which saw the village hall full to capacity and really reinforced the importance that rural communities place on ensuring that crime is tackled as effectively as in our more urban areas.

“We have a large number of people in Warwickshire living in smaller towns and villages where farming and the countryside are focal points for the community and represent major parts of the local economy.  It’s vital therefore that the police give rural crime a high priority and I will be continuing to ensure this is the case.”

He added: “I welcome the large amount of work which is already being undertaken across the county to get the message across to criminals that rural areas should not be seen as soft spots for crime.  Warwickshire Police’s Rural Matters campaign to encourage people to report rural crime and provide advice on how to reduce the risks of falling victim to crime is now well-established, as are a number of partnership initiatives designed to combat cross-border crime.

“My office has already provided funding for a number of initiatives such as Rural Watch and the three Rural Crime Co-ordinators across the county, as well as for a new 4×4 vehicle and off-road motorbikes, which help ensure that the police can reach even the most isolated parts of the county to tackle crime at source.

“It’s encouraging also to see officers are increasingly getting out into rural communities and engaging with residents and businesses, giving greater opportunities to spread crime prevention advice and with a specific push to increase the numbers of crimes that are reported so that we can have an accurate measure of the scale of the problem.

“When I publish my Police and Crime Plan later this year, it will incorporate my key priorities for tackling rural crime, including ensuring that overall it is taken as seriously as crime in urban areas, as well as further more specific measures to ensure high value thefts of farming equipment receive a higher policing priority, with more effort put into identifying strategic solutions to reduce these crimes.”

For more information about initiatives tackling rural crime visit www.warwickshire.police.uk/RuralCrime or join Warwickshire Rural Watch to receive free advice and alerts on crime in your area at www.warwickshireruralwatch.co.uk.

There is also still time to have your say on which policing priorities are important to you by taking the Police and Crime Plan Consultation at www.warwickshire-pcc.gov.uk.  The consultation will run until Friday 26 August.