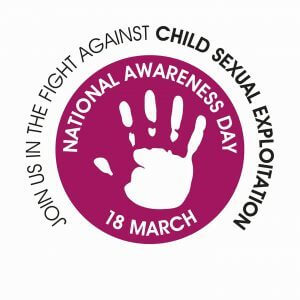 The campaign aims to raise awareness of child sexual exploitation (CSE) by supporting the #HelpingHands #CSEDay17 campaign, where the public are being asked to unite against the issue. People are asked to write a pledge on their hands and show their support for the day by posting a picture on social media.

CSE is a type of child abuse. It happens when a young person is encouraged, or forced, to take part in sexual activity in exchange for something. The reward might be presents, money, alcohol, or simply just the promise of love and affection.

Detective Superintendent Alison Davies from Warwickshire Police said: “Child sexual exploitation affects more people than many of us realise and it’s important that people understand this type of abuse can happen to any child anywhere.

“The national awareness day is an opportunity for the public to show their support and help get involved. We all have a role to play in keeping children and young people safe from sexual exploitation.

“Please visit Something’s Not Right, Warwickshire’s multi-agency campaign to raise awareness of child sexual exploitation. It encourages anyone who sees anything they are concerned about, if something’s not quite right,  to get in touch so we can provide help and support. ”

Backing the #HelpingHands campaign, Warwickshire Police and Crime Commissioner Philip Seccombe said: “It’s vitally important that we keep vulnerable members of our community safe and tackling child sexual exploitation is one of the areas which I am investing additional funding to ensure it receives the priority it deserves.

“The #HelpingHands campaign will help to raise awareness of that fact that, sadly, child sexual exploitation and other forms of child abuse do continue to happen in our communities. I hope the message comes across equally as loudly that help and protection is available for those who are suffering and that the police will do all they can to get justice for victims and put offenders before the courts.”

You can find out more about CSE Awareness Day 2017 at: www.stop-cse.org/national-child-exploitation-awareness-day.

Information and help for people concerned about CSE in Warwickshire is available from the ‘Something’s Not Right’ website at: www.warwickshirecse.co.uk.