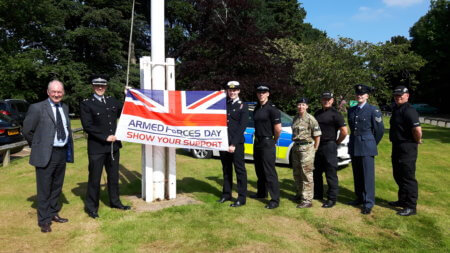 The force is raising the Armed Forces Day flag today (June 25) at Leek Wootton to show its support for the men and women who make up the Armed Forces community – from currently serving troops to service families, reservists, veterans and cadets.

The Commissioner served with the Army Reserves for 25 years, commanding his regiment and reaching the rank of Colonel.  He still maintains his military connections as chairman of the West Midlands Reserve Forces’ and Cadets’ Association and as chairman of the Warwickshire Army Benevolent Fund.

He said: “Armed Forces Day is a chance to celebrate the work of our service personnel, veterans, cadets and their families and I am delighted that Warwickshire Police is showing its support, not only visually through the raising of the flag but also by its commitment to the Reservist Policy and the volunteering ethos in general.

“A strong Army Reserve is a vital element in the protection of our national security, and I have been keen to encourage officers and police staff who sign up to become Reservists.

“The additional skills and experiences that they bring back to Warwickshire Police is something that the wider community here in Warwickshire benefits from on a daily basis.”

Chief Superintendent Alex Franklin-Smith said: “In January 2018 we signed the national Armed Forces Covenant, demonstrating our commitment to treating service personnel and their families with fairness and respect, and recognising their dedication and sacrifice in serving our country.

“As part of this commitment we look forward to celebrating Armed Forces day with our county’s military community, and supporting the covenant’s great work in the future.”

Warwickshire Police has a Reservist Policy in place to support its employees. The Reservists have an essential role in our Armed Forces and, through their dedication and professionalism, they make a vital contribution to protecting the nation’s security at home and overseas. Reservists give up their spare time to serve in the Reserve Forces – balancing their civilian life with a military career.

Inspector Lucy Sewell has served with the Royal Signals for 30 years, during which time she has deployed to Afghanistan, Germany and Canada.

She said: “Joining the Reserves gives you an opportunity to enjoy a range of extraordinary new experiences and to develop new skills you would not ordinarily have in your day-to-day life. It has also provided me with skills that are transferrable to my role as a police officer.”

Warwickshire Police employ several veterans, both serving police officers and police staff.  A veteran is anyone who has served in Her Majesty’s Armed Forces at any time (including National Servicemen, Regulars and Reserves). Armed Forces Day celebrates their continued role within the military community.

PC Andy Dear is a Remember Veterans Champion within Warwickshire Police. He has received additional training to enhance his knowledge of the difficulties and barriers faced by Veterans following their transition from military service and within the Criminal Justice System.

PC Dear is happy to support not only veteran comrades within Warwickshire Police, but also veterans he comes into contact with during the course of his duties as a patrol officer.