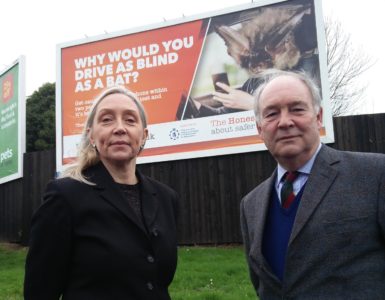 Striking animal head imagery from road safety project The Honest Truth is appearing on billboards across Warwickshire this February to challenge the behaviours of younger drivers around their use of mobile phones – the truth.

Funded by Warwickshire Police and Crime Commissioner Philip Seccombe, the campaign builds upon the first phase of the outdoor campaign in December that focussed on the consequences of drinking and driving.

Whilst we all should know it is illegal to hold a mobile phone or sat nav while driving or riding a motorcycle, we cannot deny that smart phones bring amazing benefits from increased connectivity, access to instant web surfing and sharing news and information.

While we should enjoy this, we can become too attached to our phones.  If this sounds like you, it is even more important to put your phone out of sight in a bag or glove box when you are driving so you don’t get tempted to check it.

Inspector Jem Mountford said: “Even using a hands-free mobile phone or sat nav while driving is a huge distraction, and any distraction greatly increases the risk of being involved in a collision.  You must stay in full control of your vehicle at all times. Officers use their judgement and if they think you’re not in control because you’re distracted they can stop you and you can be prosecuted.”

That’s not all though, you could be back to L-plates if officers stop you within two years of passing your test. The law still applies to you if you’re stopped at traffic lights, queuing in traffic, or supervising a learner driver.

It’s not just mobile phones that can distract you, changing the channel on the radio, chatting to a passenger, and having children in the car can all hinder your concentration when driving.

Dr Gemma Briggs, Senior Lecturer in Psychology at The Open University said: “If you’re distracted by your phone while driving your driving performance is significantly diminished to the extent that you are four times more likely to crash. You’re far less likely to notice hazards and will take much longer to react to any hazards you do see. This applies equally to hands-free phone use as hand-held use, meaning having two hands on the wheel and both eyes on the road isn’t enough if your mind is elsewhere. Drivers don’t have ’spare’ attention to apply to other tasks – that’s simply not how our brains work.”

When you are distracted you are much less aware of what’s happening on the road around you, you may fail to see road signs, fail to maintain proper lane position and steady speed, are more likely to tailgate the vehicle in front, react more slowly and take longer to brake.  You are also more likely to enter unsafe gaps in traffic and feel more stressed and frustrated.

Try out these quick tasks which demonstrate how your attention works:

Annette Lloyd, Head of The Honest Truth said: “The campaign builds on the original concept of the animal heads developed over 10 years ago and has been refined with input from behavioural research scientists to communicate messages that are likely to resonate specifically with young drivers. The strong visual image to grab attention linking to the notion that using a mobile phone makes you blind – if you were asked to close your eyes for 3 seconds whilst driving along would you?  And specifically the message that if a driver is caught using their phone within 2 years of passing their test then they lose their licence – that’s the truth.”

Warwickshire Police and Crime Commissioner Philip Seccombe said: “This is the latest in a number of road safety initiatives I am funding to try and make a real difference and reduce casualty numbers on our county’s roads. Working with The Honest Truth I want to make young drivers aware of the risks when they start to drive alone. By learning about The Honest Truth, new drivers are given the confidence to challenge inappropriate behaviour by passengers and make the small changes necessary to stay safe. 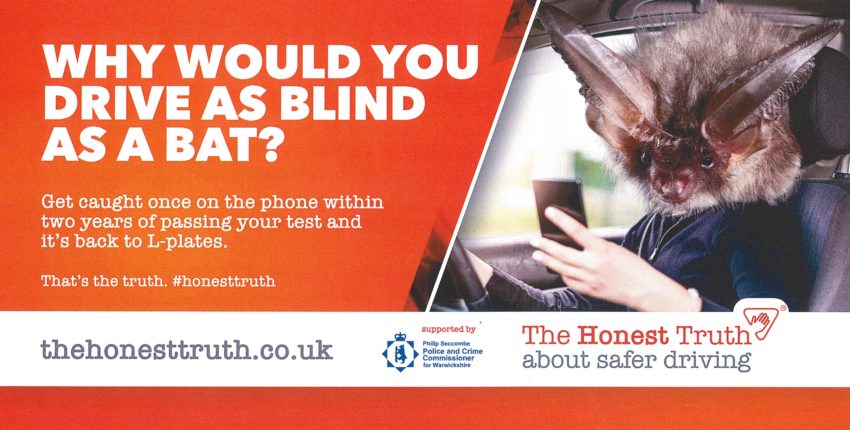