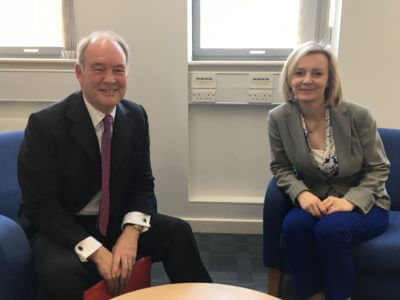 Warwickshire Police and Crime Commissioner Philip Seccombe with the Lord Chancellor and Secretary of State for Justice Liz Truss MP during their meeting at the Justice Centre in Leamington Spa.

Leamington’s state-of-the-art Justice Centre was showcased to the Lord Chancellor and Secretary of State for Justice Liz Truss MP last week, in a visit hosted by Warwickshire Police and Crime Commissioner Philip Seccombe.

The event, which took place on Friday afternoon, gave the minister an insight into the running of the Justice Centre, which is designed specifically to bring multiple services together under one roof, breaking down the traditional barriers between criminal justice agencies and facilitate more integrated working.

As well as seeing the Crown and Magistrates’ Courts, the Minister was also shown the Police and Victim Support offices, where she was able to talk to representatives from the Witness Service, Probation and the Youth Justice Service.

Speaking after the visit, Warwickshire Police and Crime Commissioner Philip Seccombe said: “I was keen to take advantage of the fact that the Minister was in the county to showcase one of our two Justice Centres.  I know from my discussions with other Police and Crime Commissioners up and down the country that the concept of combining under one roof all of the agencies involved in the local delivery of criminal justice is widely regarded as a template for best practice, and all of the partners are quite rightly very proud of facilities we have here and at Nuneaton.

“In my meeting with the Minister, I discussed the wider delivery of criminal justice in the county, including restorative justice programmes and our ongoing work to ensure that victims and witnesses are the focus for all agencies.  My forthcoming Victims’ and Witnesses Charter – a key commitment in my Police and Crime Plan – is currently being consulted on with partners and will be launched publicly later this year.

“During the tour of the building I was also keen to ensure that staff involved in the delivery of justice locally were able to talk to Secretary of State, so they could share with her their experiences of how it works in practice. Overall, I felt it was a very constructive visit, which I was pleased to be able to facilitate at short notice.”