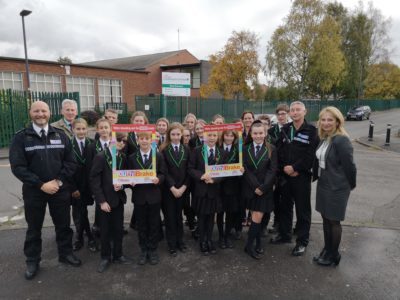 A group of school pupils have helped launch a new road safety project in Warwickshire aimed at making local streets safer for people who walk or cycle and spreading important messages about the dangers of speeding traffic and pollution.

The 16 safety-conscious children from The George Eliot School in Nuneaton are some of the first young people from Warwickshire to take part in Youth for Brake – a new road safety and sustainable transport campaign organised by national road safety charity Brake. And they’re now encouraging other young people from the region to get involved.

The project for 11-16 year olds is being offered to five secondary schools or youth groups in Warwickshire thanks to Brake’s partnership with fellow NGO Brightkidz and funding from the Police and Crime Commissioner for Warwickshire, Philip Seccombe. Pupils from Nicholas Chamberlain School, in Bedworth, are also taking part – leaving just three spaces left for this year.

In 2018, 35 people were killed, and 325 people were seriously injured on Warwickshire’s roads [1]. There was a total of 1,654 road casualties – the equivalent of five people being hurt every day on a Warwickshire road. But last year child casualty figures for 0-16 year olds reduced by 29%, with 133 children being injured in 2018 compared to 187 children in 2017.

On average, six children are killed or seriously injured on roads in Britain every day [2], and the World Health Organization says road crashes are the leading killer of children and young adults (aged 5–29) globally [3].

Youth for Brake aims to give young people the knowledge, skills and confidence to lead a campaign and engage with their peers about road safety and the dangers posed by transport. With support from Brake, the youngsters set up a committee, choose a road safety or sustainable travel topic, run their own campaign and then evaluate their successes and present their work at a special event next year.

It’s a chance for young people to work with their friends to shout out about the need for changes that can make Warwickshire safer for people who walk or cycle, and spread important messages about the dangers of speeding traffic and pollution.

Brake has been helping schools, parents and young people promote road safety for almost 25 years. As part of this project, young people can also fundraise to support Brake’s work campaigning for safer roads and supporting people who have been bereaved or seriously injured following a road crash.

Brake also has support from Toyota Manufacturing UK Charitable Trust to run the Youth for Brake project in schools close to the car manufacturer’s plants in Deeside, North Wales, and Burnaston, in Derby.

To get your school involved with the Youth for Brake project visit www.brake.org.uk/youth or email dnichols@brake.org.uk

Dave Nichols, community engagement manager at Brake, said: “We are delighted George Eliot School in Nuneaton has joined this initiative. Children and young people face some of the toughest journeys when travelling in their communities – from a lack of safe places to walk, cycle or cross the road, to increased pollution levels and unsuitable public transport. The good news is young people are also passionate and creative, and we look forward to seeing what ideas school pupils in Warwickshire come up with.”

Sophie Smith, head of religious education and PHSE at The George Eliot School, Nuneaton, said: “We’re thrilled to be one of the first schools involved with Youth for Brake and our children are looking forward to coming up with their own ideas so they can raise awareness about the important topic or road safety. We’re always keen to support our students in shaping their futures and this innovative project allows them to make a difference within their local community.”

Police and Crime Commissioner for Warwickshire, Philip Seccombe, said: “I am determined to reduce road casualties on Warwickshire roads and make Warwickshire roads safer. I have met families affected by death and injury on our roads and their lives are adversely changed forever as a result. So I am determined to do more to help. Reducing death and injury on our roads is a key priority in my police and crime plan. It is why I have launched my Road Safety Fund. I have made available £500,000 for projects aimed at making Warwickshire roads safer principally through education initiatives. That is why I have given funding to Brake to launch the Youth for Brake project in Warwickshire. It is vital young people understand road safety issues. I want them to become safer and to mature into adults who have a good and safe attitude towards road use. Hopefully, their safe attitude and behaviours will also positively influence friends and peers to also becoming safer on our roads in Warwickshire.”

Alison Holland, founder of Brightkidz, said: “Here at Brightkidz we’re delighted to be collaborating with Brake on this project to enable young people to help make our roads safer for everyone. It’s so important for young people to realise they have influence and their everyday choices make a difference now and in the future – whether it’s about driving undistracted, lobbying for safety features or helping reduce the number of cars on the road by choosing to walk, cycle or take the bus instead.”