Rural patrols help deter crime in and around county waterways 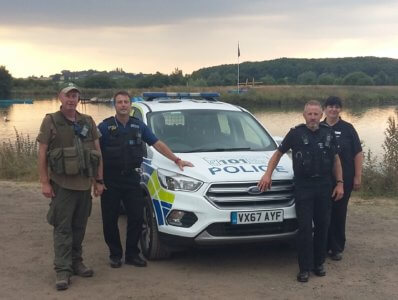 A recent operation saw local officers from Coleshill and Atherstone work with the PCC-funded Rural Crime Officer and partners from the Environment Agency and Angling Trust to tackle crime in rural areas and on our waterways.

Patrols took place during the night at locations across the north of the county, including Kingsbury, Water Orton, Shustoke, Grendon, Polesworth, Alvecote, Bulkington, Bedworth, Hartshill and Camp Hill. In the Market Bosworth area officers linked in with Leicestershire Police to deal with issues there.

As well as a range of fishing offences which were tackled as part of the wider Operation Leviathan, the team dealt with many other aspects of rural crime and antisocial behaviour, which included the seizure of an illegal motorcycle, checking of vehicles and assisting police colleagues in a search for two minors that were reported missing. The visual presence in these communities and the opportunity to speak with the public at various locations during the evening was well received.

Carol Cotterill, Rural Crime Officer for North Warwickshire, said: “It was a very effective operation with high visibility patrols in rural areas and a number of incidents dealt with. Working with partners and our neighbouring forces provided good results and positive engagement with residents and those using areas around our waterways.”

Meanwhile, in the south of the county the two PCC-funded Rural Crime Co-ordinators for South Warwickshire were on hand at the Game Fair at Ragley Hall over the weekend. Bob Church and Emily Naismith joined forces with the local police Safer Neighbourhood Team to give out crime prevention and security marking advice to the visitors the popular rural show.