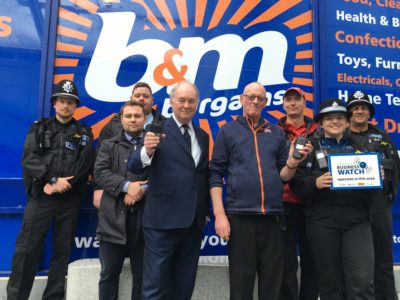 Rugby’s retail radio network has been expanded with a new repeat transmitter to extend the coverage and give greater capacity for the future, all thanks to funding from Police and Crime Commissioner Philip Seccombe.

The award of £1,000 has allowed Rugby First to purchase the new network repeater which will allow the scheme the capacity to provide further radio handsets for distribution to businesses within the Business Improvement District (BID).  It means the network can cover the daytime and night-time economies more effectively, boosting its effectiveness.

Rugby First has been working closely with the PCC’s Business Crime Advisor Bogdan Fironda to secure the funding for the scheme, which brings together police, Town Rangers and local shops, businesses, pubs and clubs together to share information and communicate more effectively.

Ryan Webster, Operations Manager for Rugby First, said: “Currently there’s nearly 250 radios in use on a daily basis at shops, other retail premises, pubs and also some of the town’s visitor attractions. Our local police officers and the Town Rangers are also equipped with the radios and it allows everyone on the network to talk to each other and share information in real time about what is happening in the town centre. It’s not just about theft and shoplifting – the radios can help tackle problems of anti-social behaviour and also to prevent and deter problems in our pubs and clubs.

“The new repeater we’ve had installed has also allowed us to boost the system’s capacity up to 500 radios, so going forward, if the need is required, we can increase the number of radios by up to double what we have now. If the BID area should ever expand or new businesses want to get involved or to do more, it gives us the capacity to be able to do that.”

Warwickshire Police and Crime Commissioner Philip Seccombe said: “I get a lot of correspondence from shop owners and other businesses concerned about shoplifting and other forms of retail crime as I know it can significantly dent their profitability. It also takes a huge amount of time and effort to deal with, so if we can try and help prevent and reduce that crime taking place, that’s good news for everybody.

“Equally, when people go out in the pubs and clubs we want them to have a safe and enjoyable time, so giving the network the capacity to expand into more venues will help everyone concerned to communicate more effectively, allowing them to intervene before trouble flares up.

“The radio network is already very successful and much valued by businesses in the town. I am pleased that this funding will help to ensure its sustainability into the future and enable more shops, pubs, clubs and other venues the opportunity to be part of this really important crime reduction initiative.”