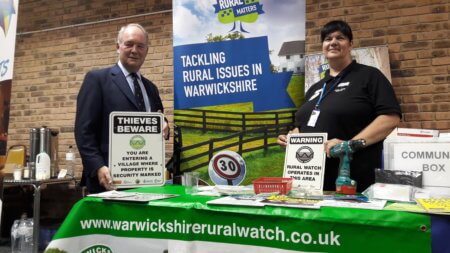 Resources are in place and efforts are being reinforced to tackle rural crime, says Warwickshire Police and Crime Commissioner Philip Seccombe, following the release of a report which showed the cost of crime in the county for rural businesses and farms was more than £1.1 million last year.

The Rural Crime Report 2018 by insurers NFU Mutual revealed that the claims for crimes from farms and rural businesses had increased by more than 30 per cent in Warwickshire in 2017, which is in line with the average for the West Midlands region as a whole.

Responding the report, Mr Seccombe confirmed that tackling rural crime remained a priority, with significant resources being committed to target the serious organised crime groups that are largely behind the increase in thefts of agricultural machinery as well as initiatives to help farms and rural communities boost their security.

Warwickshire Police and Crime Commissioner Philip Seccombe said: “Tackling rural crime has been a key part of my Police and Crime Plan since day one of my term of office and I have invested heavily in making sure that police officers have the right knowledge and skills to deal with it effectively. I have funded training for frontline officers on identifying and detecting some of the most prevalent types of rural crime, for example arming them with detailed knowledge of agricultural vehicle thefts, while the numbers of specialist wildlife crime officers have also increased, with more being  trained this year.

“There have been some notable successes in tackling issues such as agricultural vehicle thefts through the use of vehicles and machinery equipped with police tracking devices, including the recent jailing of two men from Coventry who were arrested within an hour of one of these vehicles being stolen.

“While the value of insurance claims may have gone up, police are working closely with the likes of NFU Mutual and the National Vehicle Crime Intelligence Service to ensure that when offenders are identified, stolen vehicles and property can be returned to their rightful owners.  Operations are also continuing to disrupt and bring to justice the organised crime groups which are often at the heart of much of this type of theft.

“I’ve also been ensuring that our rural communities have the advice and support they need to be able to take simple steps to increase their security measures.  I fund a team of rural crime advisors who work with police, partners such as the NFU and the Environment Agency, and they are doing great work to help communities help themselves.

“It will take a continued combination of these efforts to ensure that rural crime reduces but it is my priority to provide the necessary resources to enable this and to hold the Chief Constable to account in delivering on what rural communities are telling us they need.”