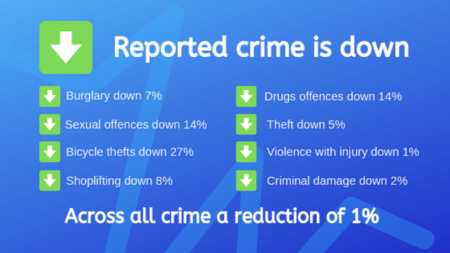 Overall reported crime across Warwickshire has fallen – bucking a national trend –  according to new figures released by the Office for National Statistics, with significant decreases in burglary, theft, drugs and sexual offences among those being revealed.

The total number of crimes reported in the county for the year ending December 2018 was 41,304, representing a 1% decrease from the previous year’s figures.  By contrast, police forces across England and Wales saw an average increase of 7%.

Across the various categories of crime across Warwickshire larger falls were seen including:

Some categories have, however, seen increased reporting year-on-year. As is the case nationally, violent crime offences are up, with reports of violence against the person increasing by 7% year-on-year, and non-injury violent crimes up 5%. In both cases, however, the increases were at a lower rate than national or regional averages, while violence which resulted in an injury actually fell slightly during 2018 in Warwickshire, down by 1%.

While the volume of knife crime incidents remains low, reports increased by 4% during 2018, though this was much smaller than the rises seen by the larger metropolitan areas across the UK and also remained below national and regional averages.

Robbery and theft from the person offences, meanwhile, showed rises (23% and 10% respectively) and these will remain areas of focus for the Commissioner and the force.

Commenting on the figures, Warwickshire Police and Crime Commissioner Philip Seccombe said: “It is reassuring that Warwickshire has seen a fall in overall reported crime, given that many other areas of the country have seen quite sharp rises and there can be an incorrect perception that crime is rising across the board here too.

“There has been a huge amount of work carried out by my office, the police and our community safety partners in Warwickshire over the past year to reduce levels of crime, so these latest figures are encouraging. I am sure the public will welcome the news that burglary, theft, drugs, sexual offences and shoplifting have all seen significant reductions in reports over the past 12 months.

“We must not be complacent though and there will continue to be a concerted effort to reduce crime in all categories, with particular emphasis on the offences that cause the greatest harm and concern to the public.

“I am putting greater resources into Warwickshire Police this year to enable the recruitment of additional police officers and crime investigators to tackle these types of offences, alongside the many initiatives I fund to prevent crime from occurring in the first place. Overall, I am determined to see crime levels fall further to deliver on my promise of a safer, more secure Warwickshire.”