Records continue to be broken as Warwickshire Police reaches 1,000 officers 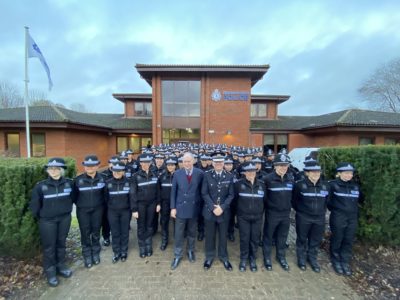 Records are continuing to tumble as new recruits join Warwickshire Police in unprecedented numbers, bringing the force’s officer headcount up to the 1,000 mark.

There are currently 98 new constables undergoing their rigorous training programme at the force’s facility at Stuart Ross House in Warwick. Split across five intake groups, it is the single largest number of new trainees to be put through their paces in the force’s 162-year history – beating the summer’s previous high of 70 student officers.

It comes as part of Warwickshire Police and Crime Commissioner Philip Seccombe’s commitment to use the council tax increases in 2018 and 2019 to bolster frontline policing, creating 150 new officer posts and ensuring officers who move elsewhere or retire from the force are replaced quickly.

Since 2018, 227 Warwickshire Police officers as well as 26 Police Community Support Officers (PCSOs) have gone through their training with the force. It means that the number of police officers in the force has reached the 1,000 mark, its highest level for nearly a decade. Once the newest recruits have completed their training, they will go on to join patrol policing roles across the county, working alongside more experienced colleagues dealing with calls from the public and conducting active patrols.

The student officers were inspected recently by Chief Constable Martin Jelley and Police and the Commissioner as they paraded outside Stuart Ross House, making for an impressive sight.

Speaking afterwards, Mr Seccombe said: “When I became Commissioner about three-and-a-half years ago, there were about 800 officers in Warwickshire and now we have moved that up 1,000. It’s always been my aspiration to see Warwickshire Police brought back up to strength and it’s great news that we have been able to do this before the end of the year.

“Together with the additional officer numbers promised by the Government, I am sure that the public will start to see the difference that these extra boots on the ground will bring. It will see more people in place to respond to emergency and 101 calls, investigate crime and bolster our Safer Neighbourhood Teams, which I am sure will be very much welcomed by local communities.”

Chief Constable Jelley added: “It was wonderful to see what is the largest number of student police officers in Warwickshire’s 162 year history on parade – exceeding my visit to the training school in the summer when we had the second largest number of 70.

“It is always a pleasure to welcome new officers and staff into the Warwickshire family.

“I wish them all well in their training and look forward to seeing them on patrol across the county in the coming months.”