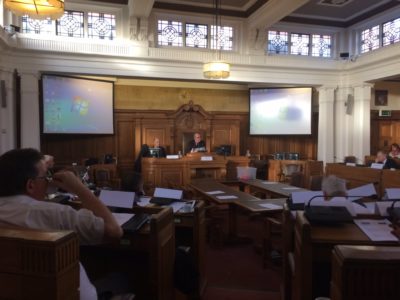 Further progress has been made towards the creation of a new county-wide protocol to deal with unauthorised traveller encampments, following a meeting organised by the Office of the Police and Crime Commissioner between the police, county, district and borough councils and Warwick MP Chris White.

The meeting at Warwick Shire Hall last Friday sought to build upon the summit held by the Commissioner in Nuneaton in January, at which Mr Seccombe suggested that a new county-wide protocol was needed, with the aim of ensuring a more joined-up approach to managing unauthorised encampments when they occur in the county.

At Friday’s meeting, more detailed discussions were held about current arrangements and how they could be boosted and improved under the protocol.  Ensuring better communication between agencies and with residents and businesses affected by unauthorised traveller encampments was agreed as being a key area for improvement.

A further meeting will now be arranged to engage with representatives of the Gypsy and Traveller community and agencies which were not able to be present on Friday.  The outcome of all of the the discussions will then be developed by the Commissioner’s office into a draft protocol.  This will need to be discussed and agreed by the executive boards of each of the partner agencies responsible for its delivery, prior to any formal adoption.

In the meantime, it was agreed that a ‘virtual’ email group will be formed of the frontline practitioners to assist communications and help enhance the management of unauthorised encampments under existing arrangements. Warwickshire County Council will also be writing to county MPs with specific suggestions as to how current legislation could be improved.

The full minutes of the meeting on 3 March and a summary of the original January summit meeting can be found below.