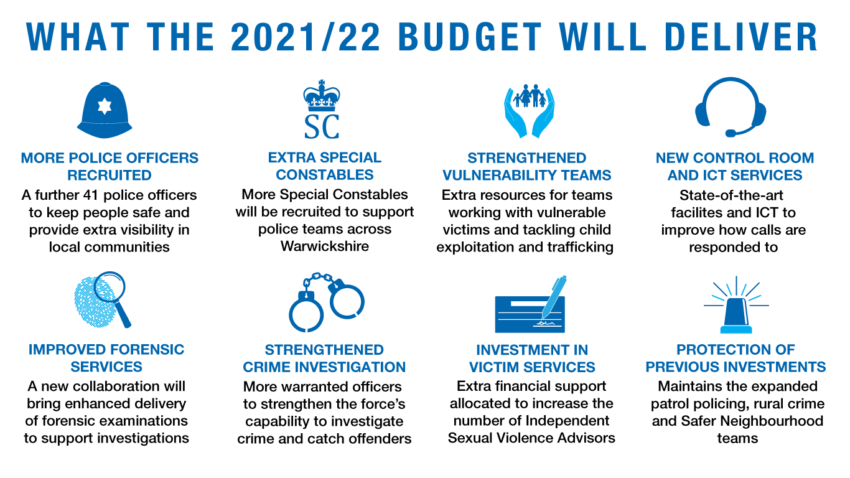 Continued development of an improved policing service for residents and businesses in Warwickshire has been assured thanks to the approval of the budget put forward by Police and Crime Commissioner Philip Seccombe.

Members of the Warwickshire Police and Crime Panel voted to support the Commissioner’s spending plans for 2021/22 following a virtual hearing of members today (February 1).  A total of nine panel members supported the budget proposals, with one against and one abstention.

The meeting heard that the budget would ensure that Warwickshire Police had the resources it needed to deliver improved services to the public, without spending more than it receives and having to rely on increased use of reserves to make up the shortfall.

The budget also means that the improvements delivered through past increases in the Police Precept can be protected and further enhancements delivered.

Over the next financial year, the approved budget will deliver:

The exact budget figures are subject to final confirmation of Warwickshire’s share of national policing funding but will be notified to households when they receive their Council Tax notices from their district or borough council in late February/early March.

Warwickshire Police and Crime Commissioner Philip Seccombe said: “This has been the most difficult budget to produce of my term of office, coming as it does amid very uncertain economic times and as all communities continue to feel the effects of the coronavirus pandemic.

“The financial settlement we receive from Government does require PCCs to increase the police precept element of Council Tax in order to be able to sustain increased funding for policing. While additional funding is of course welcome, I do appreciate that asking the public for more is not easy, particularly at a time when people in our communities are facing tough financial circumstances themselves and for whom any rise in Council Tax will be difficult.

“I am very mindful that across local government there are similar financial stresses and the other authorities that set the precepts which affect the final Council Tax bill are also likely to be planning increases. However, I have to balance these concerns against the need to ensure that policing in our county delivers against public expectations, while also having a firm financial footing.

“That’s why I have asked the force to undertake efficiency savings in the current year in order to deliver a balanced budget in the future. This has meant that they have had to undertake planned changes to the way they operate at a faster pace, in order to provide the savings needed to underpin that long-term financial stability. Difficult though that process has been, I have been assured that the resulting operational changes will lead to greater resilience for the force and will deliver an improved service to the public.

“Increasing the Police Precept is not something I propose lightly but I am convinced that it is the right thing to do. Without the funding it delivers, the force would be in a position where much larger savings would be needed. With staffing amounting to around 80% of the total budget, it is not hard to see how this would inevitably lead to painful decisions and cuts to services, which I am keen to avoid.

“Instead, the police will have the resources they need to deliver what our consultations have shown the public want to see; namely an improved capability to solve crime, with strong visibility to reduce offences occurring in communities, alongside a continued focus on protecting the most vulnerable in society from harm.”

Mr Seccombe added that he would continue to lobby Government for changes to the way in which the national police funding is distributed, which currently means that Warwickshire receives a smaller portion of its funding from the national pot, particularly when compared to the large urban forces.

He said: “I have spoken to ministers to raise this issue many times over the past few years as the current formula is widely acknowledged as not being fit for purpose. Council Tax now makes up around half of our budget and yet in other parts of the country households pay considerably less for policing, yet their forces can fund significantly more officers per head of population.

“While the current economic outlook for the public sector has obviously been drastically altered by the pandemic, this probably only increases the need to ensure that funding is distributed fairly, so it is a cause I will continue to pursue.

“Finally, I am grateful for the support of the Police and Crime Panel today in approving this budget. I will monitor how it is delivered very closely as it is important that taxpayers see the delivery of real improvements from the money they contribute.”

Warwickshire Police’s Chief Constable Martin Jelley added: “The increase in funding will allow Warwickshire Police to maintain and enhance further our frontline services. The growth in officer numbers these last two years has increased our ability to tackle local crimes that impact our residents’ lives. We all want less crime and this budget settlement will help ensure the resources are in place to make Warwickshire even safer.”