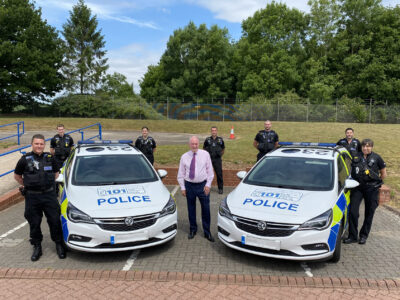 Three areas of policing are set to see increased focus across the county as a direct result of the extra resources provided by increased Council Tax funding, Warwickshire Police and the Police and Crime Commissioner, Philip Seccombe, have confirmed.

The news comes as part of the Commissioner’s commitment to use the Police Precept increase to boost visible policing across a range of key areas of concern for the public.

In detail, the additional precept funding is enabling:

Chief Constable for Warwickshire Police, Martin Jelley, said: “I am extremely pleased to announce these additional initiatives that will help make our communities safer.

“Rural crime and vehicle crime are two very important issues which can cause huge distress and financial hardship to victims, and we are determined to address this.

“Similarly, our Safer Neighbourhood Teams are vital in our communities to work with residents and businesses to resolve local concerns, and we believe the addition of these officers will have a substantial impact in supporting the existing teams.

“I’d like to thank the public for their support to enable this increase to take place, and am confident our communities will really see the benefits from these additions.”

Commenting on the announcement, Warwickshire Police and Crime Commissioner Philip Seccombe said: “When asking the public for increased contributions for policing through their Council Tax over the past two years, I promised to make sure that Warwickshire Police had the resources it needed to give extra focus to the issues that matter most to communities.  I thank residents for their support in giving that extra funding and want to make sure they know how it is being used effectively.

“Vehicle crime, rural crime and neighbourhood policing in our town centres are among the topics I get most feedback from the public on, so I am pleased to see these will all now be getting enhanced focus. I am sure this is something communities across the county will also welcome.

“Overall, it has been a record-breaking year for recruitment, meaning Warwickshire Police is now in a strong position, with over 1,000 officers for the first time in a decade or more.  Alongside these newly expanded teams, there are also many more officers now in patrol policing helping to respond to the public’s calls to 999 and 101 and this is beginning to make a real difference and delivering on my ambition to create a safer, more secure Warwickshire.”

The announcement comes part of a record-breaking year for officer recruitment for Warwickshire Police, with the force bringing in more than 200 additional officers to the county.  By the end of March it had reached a total of 1,043 officers– the highest number seen since 2009 and meaning the Commissioner’s ambition of topping the 1,000 mark during his term of office was achieved well ahead of time.  Further increases are set to come through the second phase of the Government’s uplift in officer recruitment from 2021 onwards.