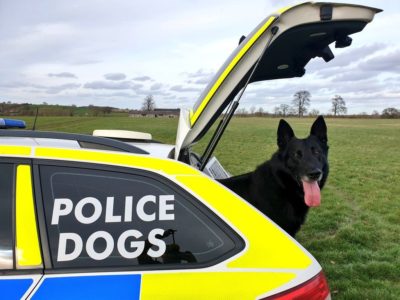 Warwickshire Police and Crime Commissioner Philip Seccombe says that a new law protecting police dogs and other services animals is an important recognition of the vital role they play in keeping communities safe.

The Animal Welfare (Service Animals) Bill, known as ‘Finn’s Law’, came into law on Saturday (June 8) and will prevent those who attack or injure service animals from claiming self-defence and also means that service animals will not be treated simply as ‘property’ by the law.

The law is named after Finn, a Hertfordshire Constabulary police dog who was stabbed whilst pursuing a suspect with his handler PC David Wardell. Finn sustained serious stab wounds to the chest and head while protecting PC Wardell from a knife-wielding robbery suspect. However, only criminal damage charges could be brought against his attacker with the law as it stood.

PC Wardell began a campaign to have the law changed to reflect that service animals are much more than simply ‘property’ and that those found guilty of attacking them should receive stricter punishment.

This new legislation, coupled with the government’s plans to increase maximum sentences for animal cruelty offences to five years in prison, will make sure those who harm service animals are punished accordingly.

PC Wardell and Finn went on to become household celebrities as a result of the publicity around the campaign and their appearances on ITV’s ‘Britain’s Got Talent’ show.

Commenting on the introduction of ‘Finn’s Law’, Warwickshire Police and Crime Commissioner Philip Seccombe said: “I’ve been extremely impressed by the way in which PC Wardell and Police Dog Finn have campaigned to change the law to make sure service animals have the level of protection in law that their tireless work to protect our communities deserves.  I wanted that protection for our police dogs here in Warwickshire, which is why I was pleased to back the campaign.

“The previous law, which treated service animals as little more than property, was simply inadequate, so it is absolutely right that this has now been corrected.

“The need for this new legislation does very sadly highlight the risk of violence that all our service animals and police officers face in the course of their duties. However, I think the strong public support for Finn’s Law illustrates how highly we all think of service animals and policing more generally – and that’s something I hear reflected time and again across Warwickshire.”