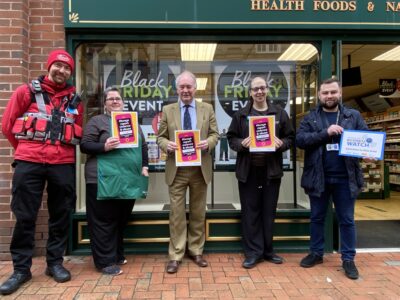 He joined Business Crime Advisor Bogdan Fironda on a special awareness day on Black Friday in Rugby, designed to encourage shoppers to treat staff with respect on what is traditionally the busiest time of year for retailers.

#ShopKind posters, signs and till screen graphics have been handed out to local retailers in the town and a special awareness stand was also held at Elliot Fields retail park to educate the public and provide crime prevention advice. Similar activities have been held elsewhere in the county, including Stratford-upon-Avon.

Violence and abuse against shop workers is a growing problem with the British Retail Consortium estimating 455 abusive or violent incidents occurring every day in the retail sector in the past 12 months.

Backed by the Home Office, #ShopKind is an ongoing campaign delivered by the Association of Convenience Stores to encourage positive behaviour in shops, acknowledge the important role shop workers have and highlight the impact of and scale of violence and abuse they face.

Mr Seccombe said: “Retailers and shop staff play a vital role in our communities, highlighted during the pandemic, when they truly have helped people continue to get vital supplies and keep the local economy going. Despite this, shop workers continue to see a rise in assaults and abuse against them, which is simply unacceptable.

“That’s why I am backing the #ShopKind campaign, as well as pledging to ensure a better response from police when such incidents are reported. It’s important to spread the message and remind shoppers of the need for kindness, not only as we have the very busy period in the run up to Christmas but all year round.”

More information and resources about #ShopKind can be found on the Warwickshire Business Watch website at: https://www.warwickshirebusinesswatch.co.uk/5176-2/