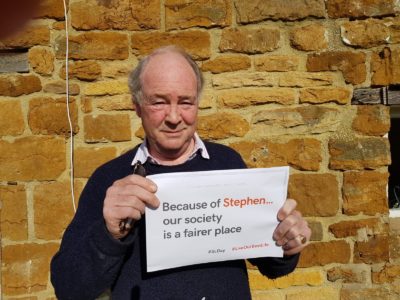 Warwickshire Police and Crime Commissioner is supporting Stephen Lawrence Day (April 22), the second national day of commemoration for the teenager who was killed in a racist attack aged just 18.

Most people are now familiar with the story of the young man who aspired to become an architect but whose life was cut cruelly short when he was subjected to an unprovoked attack in London in 1993. It was one of the UK’s highest-profile racially-motivated murders and is often considered a watershed moment in race relations.

The day is coordinated by the Stephen Lawrence Charitable Trust, which was founded by Stephen’s mother, Baroness Lawrence. The Trust works to inspire and support young people from disadvantaged backgrounds and to create a fairer society.

Warwickshire Police and Crime Commissioner Philip Seccombe is supporting the Stephen Lawrence Charitable Trust with funding to help create a bursary scheme to enable further research to be undertaken into effective race relations within policing. Under the bursary, expected to launch later this year, selected Black, Asian and Minority Ethnic (BAME) police officers will undertake a short scholarship each year to research a different aspect of race relations and inclusivity.

Within the county, considerable efforts are being made to ensure that Warwickshire Police continues to become more representative of the communities which make up the county’s diverse population, supported by the Office of the Police and Crime Commissioner.

A Positive Action Team has been established, with recruitment efforts scaled up within under-represented communities, in order to boost the numbers joining the police service. As a result, over the past year the proportion of new BAME officers has increased, with 5.1% of officers, 7.5% of police staff and just under 10% of PCSOs now coming from such backgrounds.

Warwickshire Police and Crime Commissioner Philip Seccombe said: “Attitudes in society are changing for the better and there has been progress in the years since Stephen Lawrence’s death, including within policing. The latest figures from Warwickshire Police are encouraging and show that the greater emphasis on showcasing policing as an attractive career proposition is starting to have an effect.

“We are beginning to head towards figures that are similar to the overall population of 11% of residents within Warwickshire from a BAME background.  The recruitment of more police officers over the next few years offers the chance to move that figure forwards more quickly than the past. I will continue to support the efforts that are being made to engage with communities more effectively to help remove some of the perceived barriers to joining the service.

“Commemorations like Stephen Lawrence Day are an important part of this, helping to reinforce that there is no place in society for racism and empowering young people to discover what they are capable of and to have hope in their own futures.

For more information about the work to tackle hate crime in Warwickshire, visit: www.reporthatenow.com.