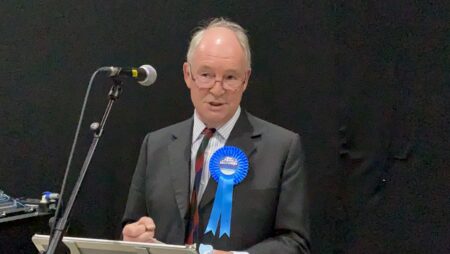 Philip Seccombe gives a speech at Stoneleigh Park after being declared the winner of the 2021 PCC Election in Warwickshire.

Philip Seccombe has been declared the Police and Crime Commissioner for Warwickshire for a second term, following the results of the 2021 PCC Elections in the county.

Mr Seccombe gathered 85,963 votes, which were enough to secure an outright majority after the first round of ballots were counted at Stoneleigh Park today (Monday 10 May).

Turnout for the election was the highest yet seen for a PCC Election in the county, with 38.45% of voters taking part.

The results in full were:

Speaking after the result was declared, Mr Seccombe said:

“I’m delighted to be returned for a second term of office and to continue to be able to deliver on my pledges to improve policing and community safety in Warwickshire. I’d like to thank the voters of Warwickshire for the confidence they have shown in me and the role of Police and Crime Commissioner.

“The turnout for the previous elections was 26% and the turnout this time is 38.5%, so that’s good news for the role and shows that the public now understand a bit more about it and they’ve come out in bigger numbers.

“I’m very much ready to get back to work and continue delivering on the manifesto pledges I campaigned on and have been carrying out since I first took office. I have concentrated on maximising the number of police officers for the county and we are now at 1,040 officers.  Over the course of the next year that will go up further to 1,100 officers, which I know is something the public and the force alike will be pleased to see.

“I have also pledged to put victims and witnesses at the heart of the Criminal Justice system.  We need to give them support, encourage them to report crime and to help them understand the court process. There is still plenty to do in this area and there are a lot of things we need to make easier for all involved.  That’s something I am committed to making progress on.

“Finally, I pledged to have a value-for-money organisation with a balanced budget. It remains as vital as ever that policing is funded well but also delivers value for taxpayers and does not spend more than it receives. That was a key part of the budget I set for this year and I can now continue to deliver this in the years ahead as Warwickshire Police continues to transform and improve the service it delivers to the community.

“Overall, I very much thank the electorate for the confidence they have shown in me which will allow me to continue to fulfil these pledges.”

Mr Seccombe’s second term of office will officially begin on Thursday 13 May.