Philip Seccombe congratulated on his election as Warwickshire’s new PCC 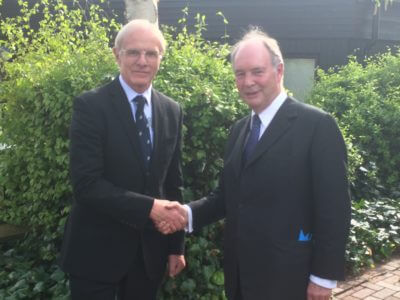 Philip Seccombe has been congratulated by out-going Warwickshire Police and Crime Commissioner Ron Ball following his success in yesterday’s election.  The electoral returning officer David Dalby confirmed the victory today (May 6) at the count held at the National Agricultural Centre at Stoneleigh Park.

The final result of the election was:

Number of valid first preference votes for each candidate:

Congratulating the new PCC, Mr Ball said: “I’m pleased to see the election result today and that from a strong list of candidates, the electorate has chosen Philip Seccombe to succeed me as Police and Crime Commissioner for Warwickshire.  I have no doubt that he will find the job as rewarding and enjoyable as I have and I wish him the very best for the next four years.

“Much as I inherited a strong platform from the former Police Authority when I took office, I am leaving Philip similarly strong foundations from which he can develop the next police and crime plan.  Warwickshire Police is recognised nationally for its ground-breaking Alliance with West Merica Police, it has bucked the national trend with more officers in post than when I took office and greater numbers on the frontline. There has also been national recognition of its prudent financial management, which means it is better placed than many forces to meet the challenges that lie ahead.

“The landscape of policing will continue to change substantially over the next four years with an even greater emphasis on cybercrime, the safeguarding of children and other vulnerable members of the community and the need to keep technological pace with an ever-changing world, as well as what is likely to be a wider remit within the criminal justice arena.  Much of the groundwork for this has already been laid and Philip will greatly benefit from the strong leadership of Chief Constable Martin Jelley and his senior management team at Warwickshire Police in delivering this.

“While I am sad to be stepping away from this role, I know that I can do so leaving a force that is in good shape and which continues to be in safe and capable hands.

Warwickshire Police Chief Constable Martin Jelley said: “I am pleased to welcome Philip Seccombe as the next Police and Crime Commissioner following the declaration today. I look forward to working constructively with him to deliver the Police and Crime Plan and ensuring Warwickshire remains a safe place to live, work and visit where vulnerable members of society are protected from harm.”

Philip will formally take up office as Police and Crime Commissioner for Warwickshire on Thursday May 12.