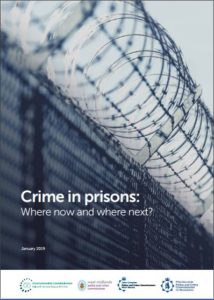 Four Police and Crime Commissioners in the West Midlands are presenting to government a hard-hitting six-month study into crime in prisons after months of research and multi-agency work.

The in-depth look at crime behind bars also presents a future plan for straightforward solutions to tackle criminality across the prisons estate.

Matthew Ellis, Staffordshire’s Commissioner has taken a lead on the work on behalf of all West Midlands Police and Crime Commissioners and visited prisons throughout the region. Staffordshire itself has 8 prisons – one of the highest number of prisons in a single county across the country.

Mr Ellis commissioned Staffordshire University’s Professor James Treadwell and Dr Kate Gooch, from University of Leicester, both experts in the field, to carry out the in-depth study. They spoke to prisoners, prison governors, staff and multiple agencies throughout the West Midlands over a period of 6 months.

The multi-agency approach in the West Midlands has resulted in all key agencies working together to tackle the systematic and deep-rooted problems and led to the development of a five-point plan to address these.

Government are installing body scanners in some prisons to stop drugs getting into prisons, but the findings of the West Midlands study show that simply sharing information better between the police and prisons can impact significantly.

An information sharing pilot at HMP Dovegate, a Category 2 prison in Staffordshire, resulted in not only identifying prison staff linked with organised crime, but also visitors who were trafficking drugs into the prison.

One of the key recommendations locally is the sharing of information between police and the prisons service, including giving prisons access to the Police National Database (PND).

Staffordshire Commissioner for Police, Fire and Rescue and Crime, Mr Ellis said: “Prisons and police sharing intelligence and data is an ideal example of the simple measures that can be taken to stop organised crime in its tracks.

“I’m sure many people would be surprised that this does not already happen as a matter of course, but it doesn’t.  The pilot at Dovegate showed how easy it should be to stop gang members ever being employed in prisons – somewhere they should never be working.”

The work carried out in the West Midlands has helped develop an approach which could be adopted nationally to finally tackle some of the cultural and organisational flaws in the system.

The recommendations are focused on five key areas, from ensuring crime doesn’t pay by taking money off criminals, to sharing information and intelligence and ensuring vulnerable inmates are protected from those who would use them to bring drugs into prisons.

The wide-ranging recommendations, will be carried through by a working group of key agencies in the West Midlands region in the coming months.

Warwickshire Police and Crime Commissioner Philip Seccombe said: “It’s hugely important that organised crime is tackled wherever it occurs in order to safeguard local communities, including when offenders are sent to prison. I’m grateful for the work that has gone into compiling this report, which highlights a number of key steps that can be taken to enable the police, prisons and criminal justice agencies to work together better.

“No one agency can tackle these issues alone but by working together and taking some relatively simple steps, we believe a major difference can quickly be made. I hope that the recommendations from this report can be taken forward at a national level to complement the work that we will be doing here in Warwickshire and across the West Midlands region.”