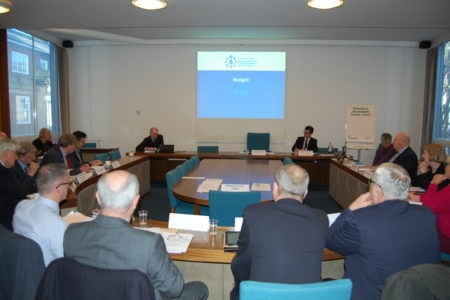 Police and Crime Commissioner Philip Seccombe has welcomed the support of members of the Warwickshire Police and Crime Panel for his proposal to increase the police precept by £12 per year (for an average band D property) in order to secure additional vital funding for local policing.

The decision to increase the precept – the portion of local Council Tax which goes towards the police budget – followed a four week public consultation which showed that 70% of respondents were in favour of increasing the precept by the maximum amount allowable, in order to safeguard frontline police officer posts.

The Panel, which comprises local councillors and independent members, scrutinises the work of the Commissioner and can exercise a veto over initial budget proposals. However, having heard details of Mr Seccombe’s budget and the Medium Term Financial Plan, the members voted to support the proposals and will now write to formally notify the Commissioner of their recommendations.

It means that, from April 1, the Commissioner will be able to raise the precept by 6.25% – equivalent to £12 per year on a Band D property.

Speaking after the meeting, Warwickshire Police and Crime Commissioner Philip Seccombe said: “I am pleased that the Police and Crime Panel members have indicated their support for my budget proposals. This means that I can now go forward to set the police budget for the year ahead and confirm my longer term funding plans, providing a solid base from which the Chief Constable can plan to meet operational policing demands.

“While raising council tax is always a difficult decision and not something I would ordinarily seek to do, I do believe that this is necessary at this time. The results of my recent public consultation have shown that a majority of local taxpayers are prepared to make an extra contribution to pay for policing, provided it is invested in safeguarding front line services here in Warwickshire.

“People overwhelmingly want to see more visible policing and for police officer posts to be protected. My budget and medium term financial plan seek to do just that and I will be investing the additional monies raised through the increase to the police precept into police officer posts here in Warwickshire. These are posts which might otherwise have had to be lost were it not for this vital injection of funding.

“My plans will still require the force to find greater efficiencies and continue with its ambitious transformation programme to modernise and meet the changing nature of crime and I will be holding the Chief Constable to account to deliver on this. I however am confident that with the investments that I have already made in new equipment, facilities and the reforms that have begun already, we can continue to meet the challenges ahead, boost police visibility and make a real difference to community safety.”

Warwickshire Police Chief Constable Martin Jelley said: “I recognise that this extra funding will not resolve all our longer term financial challenges and we will need to continue to seek to be as effective and efficient as we can. This is, however, a very welcome increase in funding which will allow me to reinvest in Operational Policing, securing around 50 police constable posts which would otherwise have been impossible.

“This will be achieved by increasing the number of constable recruitment intakes we had planned and by opening up to accept some transferees from other forces. While these posts will not appear overnight, they will filter through as the year progresses and will be very welcome additions to Warwickshire Police.”

The table below outlines what the changes will be for each Council Tax band in Warwickshire from April 1: