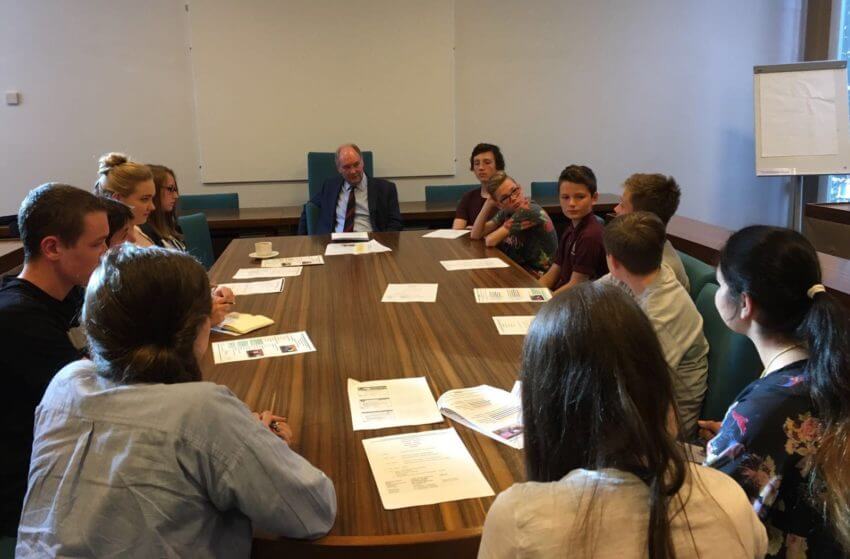 Warwickshire Police and Crime Commissioner Philip Seccombe this week continued his programme of meeting partner organisations and community groups around the county when he discussed crime and policing with members of Warwickshire’s Youth Parliament.

Attending one of the Parliament’s regular meetings at Warwick Shire Hall, Mr Seccombe outlined his own background prior to taking up the PCC role and provided an update on his vision for policing in Warwickshire.  The members also discussed ideas for youth engagement with the commissioner and were particularly keen to discuss hate crime, particularly in the context of European Referendum vote.

“I was very impressed by the topics that the Youth Parliament raised with me and was pleased to learn that they have tackling racial and religious discrimination as one of the priorities they want to address,” said Mr Seccombe.  “They want to understand more about hate crime and my office will be working with them to provide them with the latest figures.

“Engaging with all parts of Warwickshire society – young and old – is a fundamental part of my role as Commissioner, so I was delighted to meet with the Youth Parliament.  Their level of questioning and the interest they have shown in making Warwickshire a safer place was very heartening.  It’s important that young people also get their voices heard and are able to feedback on future priorities and directions and I will be making sure the Youth Parliament has that opportunity with my Police and Crime Plan.”

Tuesday evening’s meeting at the Shire Hall wasn’t the only Parliamentary visit the Commissioner made this week; on Wednesday he was at the House of Commons where he was able to watch Prime Minister’s Questions, ahead of a meeting with Warwickshire MPs Mark Pawsey and Craig Tracey.