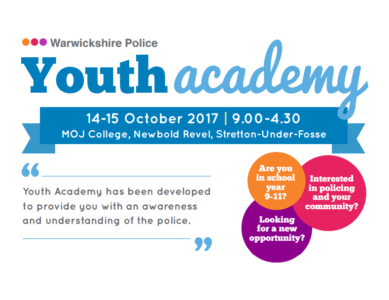 Warwickshire Police and Crime Commissioner Philip Seccombe is encouraging children in years 9-11 to sign up to a special Youth Academy being organised by the police later this year.  The free event, which takes place on October 14 and 15, gives attendees an exciting chance to find out more about the police, how they operate and why they do what they do.

Attendees will be able to experience a series of displays and demonstrations from different departments in Warwickshire Police, including a police dog display, drone flight demonstrations, displays by police firearms officers and the chance to meet officers from across the force, including traffic and roads policing teams, patrol officers and Safer Neighbourhoods Teams.  Subject to operational availability and weather, it is also hoped that the National Police Air Service will be on hand with a police helicopter.

Warwickshire Police organised a similar academy last year, which proved a major success.  Alongside the more visual demonstrations, the young people take part in a series of through provoking, challenging and engaging workshops, with inputs on cyber crime, social media, the dangers of sexting and child sexual exploitation, with facilitated discussions around choices and consequences.

The aim is to provide the attendees with knowledge and understanding of the world around them, equipping them with the skills and increased confidence to allow them to thrive safely both in person and online.

Warwickshire Police and Crime Commissioner Philip Seccombe said:  “I am delighted that Warwickshire Police is running its Youth Academy again this year, as it is vital that we can equip our young people with the knowledge and skills to stay safe in the modern world in and fun and engaging way.  Feedback from last year’s Youth Academy was very positive and I hope that pupils from across the county aged between 14 and 16 will sign up to take part.”

Chief Inspector Andy Nolan from Warwickshire Police added: “Following the success of last year I am delighted we are running our second Youth Academy. This is a collaboration of a number of agencies ­– including Warwickshire Fire and Rescue Service; Prison me! No way!; Barnardo’s and others – coming together to assist with the education of young people in areas they may be vulnerable and exposed to on a daily basis.

“As well as this, students will be able to ask questions of police in various areas of our business including firearms, dogs and our helicopter amongst other things.”

The event takes place at the Ministry of Justice Staff College at Newbold Revell near Rugby on October 14 and 15, with attendance required on both days from 9.30am and 4.30pm.

For more details and to sign up, visit www.warwickshire.police.uk/youthacademy2017 or email youth@warwickshire.pnn.police.uk  Places are limited so book early to avoid disappointment.