PCC confirms investment in body-worn cameras for police in Warwickshire 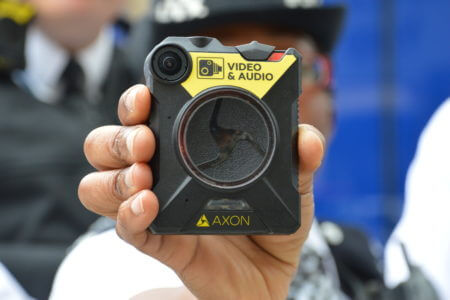 Police in Warwickshire will be equipped with body-worn cameras in a phased roll-out to frontline officers from next year, following approval of funding by Police and Crime Commissioner Philip Seccombe.

Firearms and Taser-trained officers will be among the first to receive the equipment, followed by patrol officers, with all front-line operational officers – including those in Safer Neighbourhood Teams – gaining body-worn cameras during the remainder of 2017.

The announcement comes as part of the Commissioner’s commitment in his new Police and Crime Plan to invest in a major programme of technology modernisation across Warwickshire Police and follows on from announced upgrades in mobile technology and improved IT and telephony systems.

The introduction of body-worn cameras will also play an important role in helping to boost public confidence in policing – another of the key ambitions of the Police and Crime Plan.

Officers in the West Mercia Police area will be similarly equipped, following the joint approval by Mr Seccombe and his West Mercia counterpart John Campion of the business case across the policing alliance.  The initial purchase cost for the rollout across the two forces is around £1 million.

Warwickshire Police and Crime Commissioner Philip Seccombe said: “This significant investment in new technology is great news, both for frontline police officers and also for the public.  Body worn cameras will help officers to achieve better outcomes and capture important evidence to bring cases to court.  Speaking to officers, I know this is something that they welcome.  Body worn video can also help to enhance their safety when they deal with challenging situations, as people often modify their behaviour and become less aggressive when they know they are being recorded on camera and that evidence can be used in court.

“Having a clear and irrefutable picture of what has happened in any incident is valuable, not only from an evidential perspective, but also because it provides the public with a record of how the police have acted. This greater openness and transparency will be very beneficial, for example when dealing with complaints against officers, where I believe it will help to reduce the numbers of illegitimate allegations being made, while at the same time allowing the thorough investigation of legitimate complaints to be carried out in a much more efficient and timely way.

“Introducing the technology will require a phased roll-out but I am pleased that by the end of 2017 we will be in a position to see front-line officers in all parts of the force fully equipped.”

The cameras will be attached to police officers’ uniforms to capture video and audio evidence, which can then be used to support criminal prosecutions.  They do not continuously record, as under the Data Protection Act 1998 police officers have a duty to inform a person that their actions are being recorded.  The devices themselves are also designed to make it very clear to the public when they are capturing video and audio.