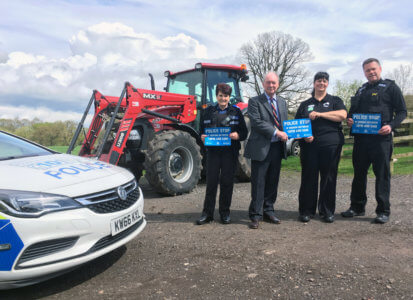 A new scheme has been launched by the police in to help tackle thefts of agricultural vehicles in the Warwickshire. Stickers with ‘Police – Stop, if moving between 10pm and 5am’ are being made available for farms and agricultural businesses to apply to their vehicles, trailers and other road-going equipment. If seen on the roads during these hours, police patrols not already engaged on calls will seek to check that they are being used by their rightful owner.

The initiative is based on a similar scheme which has been in operation with ‘cash-in-transit’ vans for many years and has been proven to successfully reduce attacks on vehicles from the security trade.

Developed in conjunction with Leicestershire Police, the new initiative is being run through the Rural Crime Project, which is funded by Warwickshire Police and Crime Commissioner Philip Seccombe.

It is hoped that by focusing on agricultural vehicles and trailers in a visible way, criminals will be deterred from thefts in the region and farms and rural businesses will benefit from the additional reassurance provided by the scheme.

It follows on from a number of successful police operations in the county targeting criminals involved in vehicle theft, who often travel from outside the county to commit their crimes. Officers have also received training funded by the Police and Crime Commissioner on how to spot the tell-tale signs that an agricultural vehicle, trailer or plant equipment is stolen, with input from NaVCIS, the National Vehicle Crime Intelligence Service.

Warwickshire Police and Crime Commissioner Philip Seccombe said: “Similar schemes have proved very successful in reducing the number of attacks against ‘cash-in-transit’ vans and we think it can have the same effect on rural crime. By proactively targeting agricultural and other vehicles out on the roads at unusual times of day, we want to reassure rural communities and also provide the deterrence message that Warwickshire is not a soft touch for rural crimes.”

Inspector David Williams, Warwickshire Police’s rural crime lead in the north of the county said: “We continue to work in partnership with the Office of the Police and Crime Commissioner for Warwickshire, Leicestershire Police and the NFU, to support our rural and farming communities. This is yet another positive initiative where we can continue to be proactive in tackling the theft of agricultural vehicles, trailers and plant equipment and make life even more difficult for offenders.”

The scheme was launched at a special drop-in advice session on the Merevale Estate near Atherstone. The event was supported by the National Farmer’s Union, and was designed to specifically help and support local farmers and address issues regarding rural crime.

Farms and rural business wanting to obtain ‘Police –Stop’ stickers for their vehicles should contact Carol Cotterill, Rural Crime Co-ordinator for North Warwickshire, by email at: carol.cotterill@warwickshire.pnn.police.uk or by calling 07787 151848.