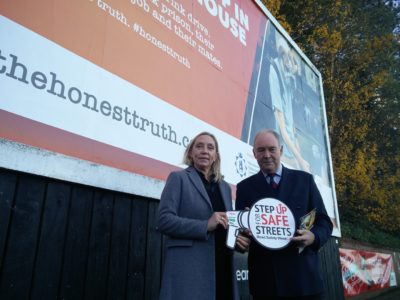 Annette Lloyd, Head of The Honest Truth, and Warwickshire Police and Crime Commissioner Philip Seccombe at one of the billboards on show across Warwickshire.

Today, 18 November 2019 a new outdoor campaign is being launched to challenge the behaviours of younger drivers across Warwickshire.  The campaign from road safety project The Honest Truth focusses on the consequences of drinking and driving – the truth.

Funded by Warwickshire Police and Crime Commissioner Philip Seccombe the campaign aims to deliver road safety messages to young drivers, ensuring they understand the risks the road can present and how to be a safer driver.

Eleven young people aged 17-25 were killed and 130 were seriously injured on Warwickshire’s roads in the year up to 31 March 2018.  An additional 594 of Warwickshire’s 17-25 year olds suffered slight injuries in road related incidents.

PCC Philip Seccombe said: “Warwickshire’s younger drivers are over represented in our road casualty statistics and we are working with The Honest Truth to try to reduce those numbers.”

“I am delighted to fund this campaign as part of a range of innovative schemes we are supporting to reduce the number of killed and seriously injured on the county’s roads.” 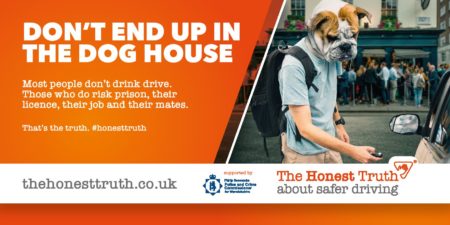 By working with well-known road safety evaluators especially skilled in the use of behaviour change theory, the new campaign seeks to raise awareness of some of the consequences of drink-driving. It is now understood that due to ‘optimism bias’ young drivers are less likely to be persuaded by suggestions that they will be killed due to a belief that ‘it won’t happen to me’. The nearer the consequences are, the more likely they are to act on them.

Therefore, the campaign focuses on the more likely consequences of drink driving such as going to prison, losing their licence or their mates. It also has a focus on ‘social norms’ – young people are influenced by their peers and want to fit into a group by use of the thought that ‘most people don’t drink drive’. 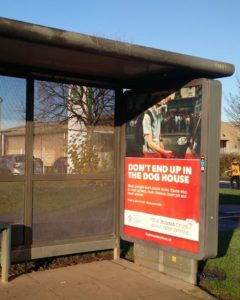 The campaign also continues to use the unique and striking animal head imagery it has from the beginning of the campaign over 10 years ago but now brought up to date.

The campaign will appear across the Warwickshire region on 48 sheet billboards and 6 sheet bus stops till the end of 2019. It will also be seen across a number of digital platforms.

Annette Lloyd, Head of The Honest Truth said: ‘We are pleased that the campaign has been developed and will be widely seen across Warwickshire and grateful to the support from Warwickshire Police and Crime Commissioner. This is a new campaign with a new take on road safety messaging and we are delighted to have been able to develop the campaign in line with current road safety evidence base.”

As well as teaching a young person to drive, Approved Driving Instructors can use The Honest Truth to also teach the essential life skills that new drivers need when first driving on their own, enabling new drivers to make the right decisions when it matters.  By learning about ‘The Honest Truth’ new drivers are given the confidence to challenge inappropriate behaviour by passengers and make the small changes necessary to stay safe.

If you are interested in becoming an Honest Truth Approved Driving Instructor in Warwickshire please email info@thehonesttruth.co.uk

The billboard campaign is being launched during national Road Safety Week between 18 – 24 Nov 2019 that aims to encourage everyone to step up and play a part in making our roads safer. For more information click here http://www.roadsafetyweek.org.uk/