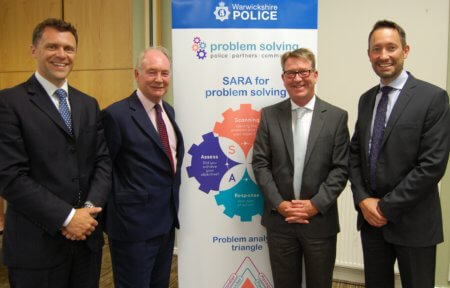 A major new focus on problem solving in local communities was launched this week by Warwickshire Police at a joint partnership conference in Rugby.

The Warwickshire Problem Solving Partnership event, held at Dunchurch Park Hotel near Rugby, was co-sponsored by Warwickshire Police and Crime Commissioner Philip Seccombe. More than 100 delegates heard how structured problem solving techniques will be used across all aspects of policing to ensure that the issues that matter most to local communities can be tackled in a measured way, making best use of resources and partnership expertise.

In his opening address, Chief Constable Martin Jelley said that he was committed to putting problem solving “absolutely in the DNA of everything that we do going forward” in order to make a positive difference to communities. By tackling the underlying causes of problems and finding workable solutions, he added, the demand on police and other partnership resources can be reduced.

The need for a more structured approach to problem solving was highlighted in the recent inspection of Warwickshire Police by Her Majesty’s Inspectorate of Constabulary and Fire & Rescue Services.  This week’s conference was the first in a series of measures being taken by the force to improve its approach to problem solving, as part of the new policing model introduced earlier this year.

The conference featured guest speakers from Durham Constabulary and Thames Valley Police who outlined how these forces have been embedding structured problem solving techniques as part of everyday business, as well as a presentation from Warwickshire Police, the Salvation Army and the P3 Charity on a partnership approach being taken in Leamington Spa to reduce homelessness and its associated issues.

“The really important thing to realise is that problem solving is not just something that we do just in neighbourhood policing, it’s actually something for everybody in every part of the organisation. It’s about identifying problems, taking responsibility for sorting them out, by working with other people and sharing information so that we can get to a solution that benefits everybody.”

Delegates at the event included partners from statutory agencies including, health, education services and local authorities, as well as the guest speakers from third and voluntary sector services. 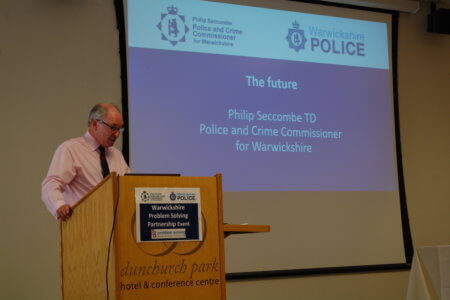 In his closing address, Warwickshire Police and Crime Commissioner Philip Seccombe said: “This is the launch in Warwickshire of a really important part of our business and something that I and the Chief Constable are committed to making a reality. Partnership working has always been very strong in this county and we want to enhance that to really improve that way in which problems in local communities can be resolved.

“The point of the conference is really to get the police talking with all our partners to start to begin to build those relationships which will help them to think about these problems and ultimately to work to eradicate them.”

A follow-up conference is being organised by Warwickshire Police and the Office of the Police and Crime Commissioner in October, which will focus on specific examples of problem solving across the county, including some of the most challenging issues, such as serious organised crime.

Then in 2019 the Chief Constable and the Commissioner will be holding a special awards ceremony, highlighting the very best examples of problem solving among police, partners and local communities, recognising significant achievements in this area.

Click to see a gallery of photos from the event