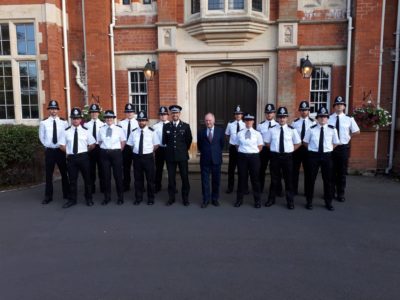 Response policing teams across Warwickshire are set to swell as the latest group of student officers are welcomed to the force.

A total of 14 new recruits passed out on 15 August during a ceremony at Warwick School. The new officers are the latest tranche to complete their training as part of Police and Crime Commissioner Philip Seccombe’s commitment to boost policing numbers across the county. Across the coming months, further student officers will be completing their Initial Police Learning and Development programme, meaning that by the end of the year there will be 150 extra officers in Warwickshire.

The ceremony recognised the achievements of a disparate group of starters – including an ex-PCSO, former prison officer, scaffolder, electrician and even a scuba diver – who are now an efficient group of officers after around 17 weeks of intensive training.

One of the new intake, PC Chris Bridge, gave the students’ perspective. He said: “We all had different reasons for joining Warwickshire Police, but we all wanted to get hands-on in the community and make a positive difference.”

Deputy Chief Constable Richard Moore not only thanked the officers for all of their hard work, but also expressed his gratitude to the families for their support during the training process.  In his address to the new officers, he said: “Policing is one career with many different jobs and we recruited you because of who you are – your different skills, trades, backgrounds and the things you care about. You will find so many ways to serve the public, and if you serve them well in their hour of need, they will never forget that. Best of luck and congratulations!”

Warwickshire Police and Crime Commissioner Philip Seccombe said: “I’m really pleased to welcome these additional new police officers as they move into their next stage of development, in response policing across Warwickshire. This is a great county and I’m pleased that, alongside these officers who are taking their first steps on what I hope will be a long and fulfilling career in policing, Warwickshire Police is also able to welcome an increasing number of experienced officers who are opting to transfer here form other forces. It’s a validation of our efforts to make this a great place to work and is another major step forward in delivering on my promise of an extra 150 officers by April 2020.”