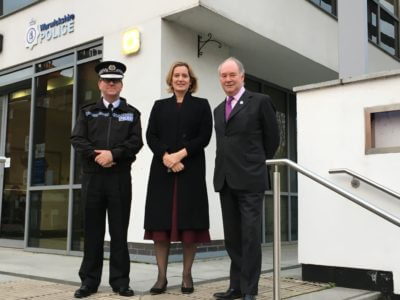 Home Secretary Amber Rudd visited Warwickshire Police to talk to officers and staff about the force’s approach to tackling domestic violence and abuse.

She was particularly keen to meet with frontline officers about their work, and with victims willing to come forward to share their experiences.

Warwickshire Police Chief Constable Martin Jelley said: “It was a great opportunity for us to showcase the excellent work our officers and staff are doing every day to tackle domestic violence and abuse. Our aim as a force is to be great at protecting the most vulnerable people from harm, and this is an area we are particularly passionate about.

“It was very positive to have the Home Secretary here today showing such an interest in what we do, and to talk with her about the pressures that policing is facing.”

Warwickshire Police and Crime Commissioner Philip Seccombe said: “I think it was very useful for the Home Secretary to see how we address domestic violence and abuse in Warwickshire.

“We work closely with partners to identify people at risk, address the situation and provide support, always with our focus on the victim.

“The meeting was very positive, and we all agreed that victims of all crimes, but particularly domestic violence, are much more comfortable coming forward to report and talk about their experiences.”

He added that he had taken the opportunity to talk about police funding and set out the priorities for Warwickshire Police in his police and crime plan.