Have your say on potential changes to firearms licensing 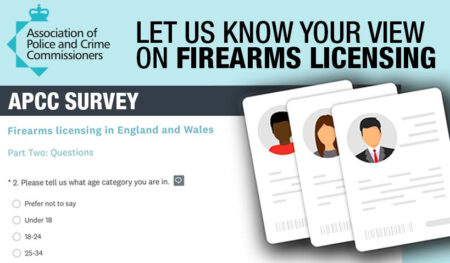 Warwickshire Police and Crime Commissioner Philip Seccombe is encouraging the public to have their say on potential changes to the licensing of firearms and shotguns in England and Wales.

The Association of Police and Crime Commissioners (APCC) has opened a short survey to seek the public’s views on things like the amount of scrutiny of medical records and social media posts that police should undertake when granting or renewing a license; and whether or not an applicant should pay the full costs of having their request processed.

The survey comes as the Home Office is undertaking a review of the arrangements for the licensing of guns and follows on from the recent tragic shooting of five people in Plymouth.

Mr Seccombe said: “The dreadful incident in Plymouth has only served to bring the licensing of firearms into sharper public focus and does raise questions about the level of scrutiny that people should undergo before being granted a certificate.  Everyone affected by that incident has my deepest condolences and I am sure those of everyone across Warwickshire.

“It is important to remember that the vast majority of licence holders use their firearms responsibly for work or leisure and that these kinds of incidents are thankfully very rare.  However, it is right that licence holders and the wider public have the chance to feed into the review to ensure that any changes to legislation are proportionate, effective and have strong public backing.

“That’s why I’m encouraging people in Warwickshire to take part and ensure their views are heard through the survey launched by the APCC.  This will feed into the response that I and the other PCCs across the country will be returning to the Home Office on your behalf and I’d like to see a strong representation of views from people across our county.”

Chair of the APCC Marc Jones said: “There has been heightened public concern following the recent shooting of five people in Plymouth. I’d like to take this opportunity to extend my sympathies to all those affected by that tragic incident, and indeed to all victims of gun crime.

“The Home Office is currently reviewing arrangements for the licensing of guns and will shortly be introducing new statutory guidance to be followed by all police forces. Police and Crime Commissioners are elected to be the public’s voice in policing and so we want to hear what the public thinks about these issues, so we can feed those views to the Home Office.

“We want to hear from all sides including people who are, or have previously been, a registered firearms licence or shotgun certificate holder. The public may be surprised to hear that there are more than half a million licence holders in England and Wales, who legally own nearly 2million firearms. We know the overwhelming majority do so safely and responsibly.

“So, while it is absolutely right that we have a discussion on licensing, we should be careful to ensure any changes to guidance or legislation are proportionate, reflect the public’s views, and above all are effective at keeping people safe.”

The survey can be completed online and takes just a few minutes to complete. The closing date for responses is 5pm on Wednesday 20 October.